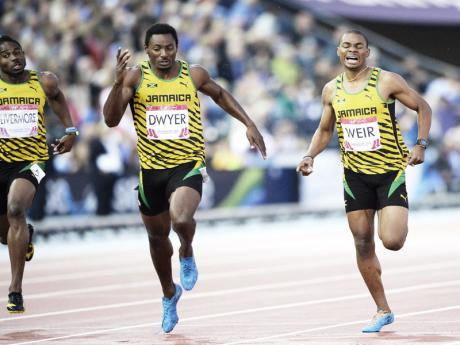 Rasheed Dwyer became Jamaica's third Commonwealth Games 200m champion, following in the strides of Donald Quarrie (1970, 1974) and Omar Brown (2006), but is not putting any pressure on himself as he looks to move on from this success.

Dwyer outpowered Olympic and World Championships medallist Warren Weir to claim his first major title, four years after failing to even advance to the final at the Delhi 2010 Commonwealth Games.

The 25-year-old posted 20.14 seconds, with Weir crossing the line in 20.26 and Jason Livermore posting 20.32 as Jamaica swept all medals in a men's 200m at a major championships for the second time following their London 2012 sweep.

"Words cannot explain what I feel right now, I'm happy, elated to be Commonwealth Games champion and this is an important stepping stone in my career," Dwyer said after his win.

"This means a lot to me, I know it's going to be a stepping stone to my career. I'm not going to put any doubt on myself or any pressure. I will continue to remain humble and focused and compete to the best of my ability at the highest level," he added.

Dwyer, the national champion, was getting his second win over Weir in as many races this season, but shared that it was the more celebrated Jamaican that helped to reassure himself and Livermore before the race even began, adding his delight at being a part of Jamaica's latest medal sweep.

"We didn't discuss a lot of stuff in the changing room or anything, every one was trying to keep their focus. Warren Weir was the one that was keeping us up, telling us to come out here and do our best and I'm really happy that we were able to get this done," Dwyer said.

"I'm not surprised about the one, two, three. When Jamaicans go out on the track anything is possible, but I'm just really happy to be a part of this one," added Dwyer.

The youngster paid homage to his coach Maurice Wilson, who he credits for building his confidence and helping him to achieve this latest milestone.

Back to the drawing board

"The question is how this changes the ambition of my coach and the drive that he has and extra work that he will have for me to put in. I'm really going to go home soon, go back to the drawing board, work on all areas, strength, endurance and work on getting ready for next year," said Wilson.

Wilson was extremely proud of his charge and also reserved praise for the other Jamaican medallists.

"He (Dwyer) ran very well to the plan that he had and basically I think the three young men preformed extremely well for Jamaica because I can't leave out Warren Weir and Jason Livermore who had some personal situations; so to lift himself and to perform so well for his country is a plus," said Wilson.

"But speaking specifically to Rasheed, I think he executed well and I am extremely proud at this moment," Wilson added.