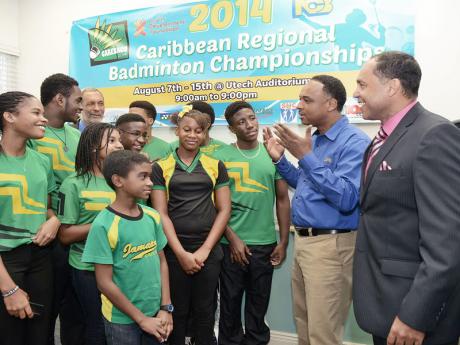 The Sports Development Foundation (SDF) has pumped $3 million into this year's staging of the Caribbean Regional Badminton Confederation (CAREBACO) Championships, which will be held at the Alfred Sangster Auditorium at the University of Technology, August 7-15.

The National Commercial Bank (NCB), one of the main sponsors of the championships, has contributed $1 million to the tournament, which is called the SDF/NCB CAREBACO championships.

Denzil Wilks, general manager of the SDF, handed over the foundation's cheque to Robert Richards, president of the Jamaica Badminton Association, during a brief press conference which was held at the Jamaica Olympic Association's office in Kingston yesterday.

"The truth is that we would have love to do more," said Wilks. "Badminton has been doing so well, and for me, I will always say one of the wonderful things that I see developing as far as badminton is concerned, it is moving down into the inner-city areas," he said.

"Haile Selassie High School is now the most outstanding school in badminton and that is just wonderful and it is spreading and so we are very happy to continue our support for the sport," Wilks said.

He added: "The fact that we are hosting is something a little more than just participating and so you want a well-organised and well-executed event, and of course, we want to see medals coming in for the youngsters."

Four countries - Guyana, Trinidad and Tobago, Barbados and hosts Jamaica - have confirmed their participation in the championships. The Dominica Republic are yet to confirm their entry.

Richards said despite the low number of teams confirmed for the tournament, he still expects an exciting championships.

"The Caribbean Regional tournament this year is not getting the amount of countries that we would have liked to come, but what we are certainly getting is the original members of the Caribbean Championships, which will be coming together to make this a very exciting tournament," said Richards.

The championships will feature team events in both senior and junior competition as well as an open tournament. The juniors will compete in Under-17, Under-15, Under-13 and Under-11 categories, respectively.

The Jamaicans will be hoping to surpass last year's tally of 16 medals, which included five gold, three silver and eight bronze.