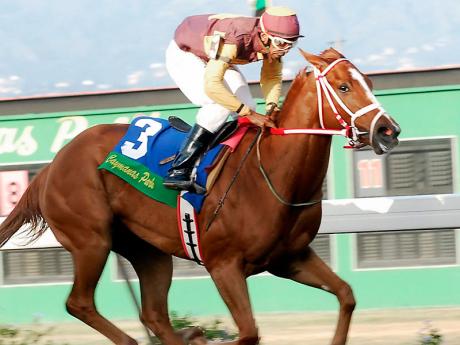 A glut of racing is in store at Caymanas Park for the next eight days, beginning with today's Betting, Gaming and Lotteries Commission (BGLC) nine-race programme featuring six trophy races.

Racing will continue tomorrow with the Owners' Association Trophy 10-race programme, followed by the Independence Day meet on Wednesday, August 6, culminating with the August 9 meet.

The Betting, Gaming and Lotteries Commission has donated $2 million to today's purses - up from $1.6 million last year. From this amount, $500,000 will go to the BGLC Trophy and the rest towards five other trophy races on the card.

Eight starters have been declared for the BGLC Trophy race and even with in-form horses such as SUINLIGHT EXPRESS and SIR VON present (both recent winners), indications are that 14-time champion trainer Philip Feanny holds the key with his highly fancied pair of BUBBLING ANGELINE and EL PODEROSO.

The American 5-y-o horse EL PODEROSO under champion jockey Dane Nelson finished second to his brilliant unbeaten stable-companion PRINCESS POPSTAR over 1200 metres on July 16, but prior to that had won back-to-back races in June. With no 'POPSTAR' around, he could prove equal to the task despite top weight of 57.0kg.

Preference, however, is for BUBBLING ANGELINE, who returns with a mere 50.0kg following her runaway win over 1300 metres in a good time on June 14.

The talented chestnut filly by Blue Pepsi Lodge out of Miss Angeline obviously has the speed to lead them into the straight and, having worked well and former champion jockey Percy Williams retaining the ride, should hold EL PODEROSO at bay in the final rush.

Elsewhere on the programme, the down-in-class American horse NEW KINGSTON (Shamaree Muir up) and PHINEAS (Dick Cardenas) should fight out the finish of the Emancipation Day Trophy race in which eight will run.

Both are in overnight allowance company recently, but NEW KINGSTON from the stables of champion trainer Wayne DaCosta, proved more competitive in his last five races at that level and, returning in this easier spot, gets the nod over the Patrick Lynch-trained duo of PHINEAS and HOLOGRAM SHADOW.

I also like ENHANCE PROSPERITY to go one better in the second race, JAVINE to stave off WINESHA in the fifth, and SAINT THERESA (regaining form) to hold THE GUMMER at bay in the sixth for the Carl Hill Memorial Trophy.