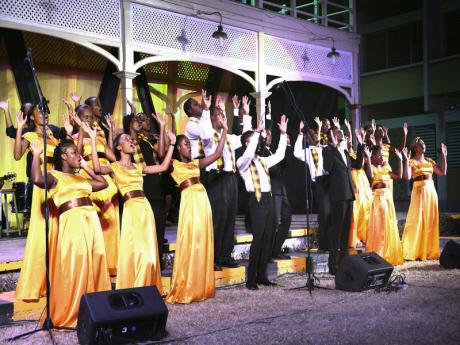 Members of the Nexxus Theatre Company and Las Voces Melodiosas join each other on stage for the Grand Finale performance at last Friday's Feast of Music concert held at The Mico University College. 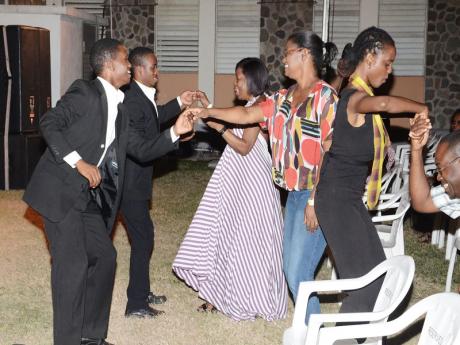 Members of the Nexxus Theatre Company interact with members of the audience during one of their performances at the Feast of Music concert. 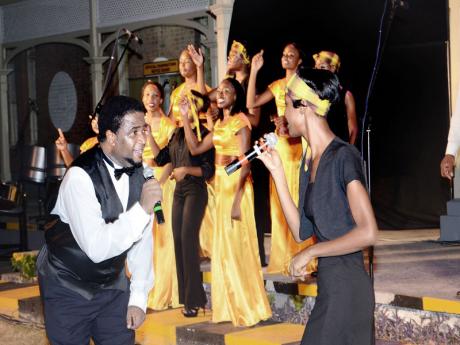 Musical director Hugh Douse and Soloist Danielle Watson during one of their performances at the Feast of Music concert held at The Mico University College last Friday.
1
2
3

Past and present students of The Mico University College got the chance to whet their musical appetites recently as the Feast of Music concert got underway on the school's grounds.

Arrangements from the evening's able music directors, Hugh Douse and Matthew Silpot, kept the intimate gathering entertained throughout the evening. From classic to folk to reggae, the performers delivered item after item in superb form, much to the delight of the hungry audience who eagerly swallowed up the performances.

The Lightning Drummers from Ardenne Preparatory and Extension High was the evening's opening act.

Drumming up a rhythmic storm, the talented group of young people thrilled the few early birds in the audience. As the evening progressed, the audience grew in numbers, and the performances gained momentum. Las Voces Melodiosas and Nexxus Musical Theatre Company were the groups who served up the most performances on the evening, first giving a lively rendition of Miss Lou's Dis Long Time Gal, before delivering solo pieces each.

Even opera was on the menu, as organisers ensured patrons got the three-course feast they were promised. Nomali Lumsden showed off her vocal dexterity with her rendition of Honour Unto the Dying Lamb and Music for a While.

Las Voces returned to the stage for a medley of selections, which included altered versions of Cindy Lauper's True Colors and Tarrus Riley's She's Royal and Stay With You.

Following a brief intermission, the Mico University steel pan group delivered in the area of instrumentals. Performing A Little More Oil in My Lamp, the group, which has been performing since last year, put in an impressive showing and was rewarded with a resounding applause at the end of their set.

Folk music took the fore in the next segment, as Nexxus delivered folk favourites to the waiting audience. Not keen on holding back, patrons were seen dancing and enjoying themselves with each song. Both musical groups rejoined each other on stage for the grand finale, as promoters did well to end the programme on time, despite the late start.

Performing a medley of Marley hits, including No Woman No Cry and One Love, both groups led the audience into a group sing-a-long, to which they obediently obliged. The concert ended at approximately 9:30 p.m.