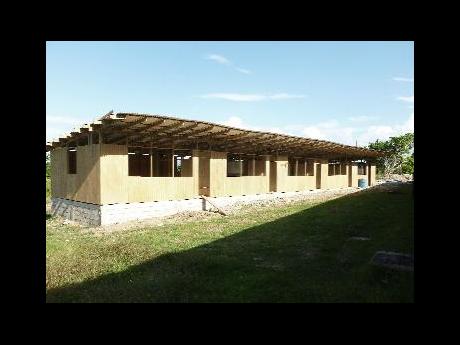 Six months ago, when Rural Xpress spoke with Colonel Errol Johnson, principal of Islington High School in St Mary, we were told of his plans to develop a new wing to house the school's vocational and technical department.

While Johnson is yet to achieve this ambitious long-term objective, the school recently celebrated the construction of five much-needed classrooms, thanks to an exceptionally fruitful partnership between students, staff and the local community.

Derry Graham, Islington High's head of department for industrial arts, described the project as "a milestone achievement", which signalled a definitive move towards improving the quality of education the school delivers.

He explained: "Sometime ago, a recommendation was made through the school's board for new classrooms to be built, but the incredible thing is that, in terms of labour costs, we were able to do it with limited funding.

"We sought the assistance of the community and their response was overwhelming. They did a little bit of work, which we paid them for, but then came back and did a lot more.

"We got a lot of donations in the form of concrete blocks, and the MP for the area, Dr Morais Guy, was instrumental in procuring funds to cover most of the material costs. Everybody chipped in, and now we have five extra classrooms."

He explained: "This project was important because our classrooms were overcrowded and the students really needed more space, and personally, helping to build the new classrooms gave me a lot more experience in welding, which is good.

"It was nice to see members of the community helping the school. As children, it feels good to know we have adults supporting us."

Morris' classmate, Amanda Tyrill, believes that working on the project helped improve her self-confidence. She said: "I nailed up a lot of the zinc and boards, and put rivets under the zinc. For me, the whole experience was excellent and makes me feel good because I know that I helped to create that building."

Fellow 11th grader, André Stewart, added: "I did some carpentry work and masonry on the floor. It was a great experience and process because I learned a lot of things, including how to cut boards and construct a building."

Despite its standing as one of St Mary's worst performing schools in terms of CSEC results, Islington High is clearly making positive steps towards improving its reputation, and according to Ricardo Daley, the school's agricultural science teacher, the future looks extremely bright.

Daley explained, "We had a real problem with space and recently moved on to the one-shift system, which made the issue more severe. Originally, we planned to build four classrooms, but managed to get five, which will alleviate some of the problems.

"Even though the rooms are not yet completed, they are already being utilised by some classes. It makes a big difference just to know there is a comfortable space to work in, and helps us better prepare the students for their exams."