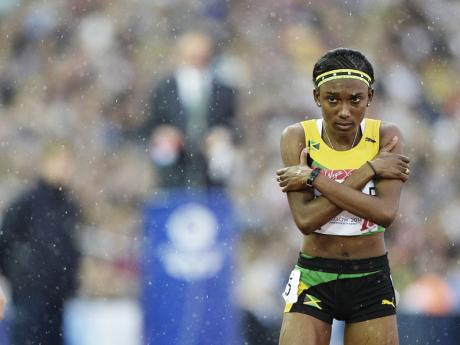 Natoya Goule feeling the cold at the Commonwealth Games in Scotland.

Jamaica's 800 metres athlete, Natoya Goule, is hoping to use her 2014 Commonwealth Games experience to push her career forward, as she looks to make a mark on the international stage in the coming years.

Goule has had an up-and-down season, winning at the New York Diamond League in June, even if she has not been consistent enough with her times this year.

The 23-year-old clocked a personal best 1:59.93 at the National Senior Championships last year, but has not always looked in the same kind of form this year.

Goule, who missed out on a spot in the women's 800m final at the Commonwealth Games on Thursday evening, clocking 2:04.23 for fifth place in her semi-final, says she has learned a lot at what is her first Commonwealth Games and is looking to push on with next year's World Championships, in Beijing on the horizon.

"It was a bit cold, to be honest but it's a good experience for me. I haven't been running as much from trials, so I wasn't in the best race shape. I'm fit and I know I can run faster than I did here, but it wasn't my day," Goule told The Gleaner after her race.

"I'm using this as more experience. Next year is a big year and another opportunity and I'm really looking forward to making it to the finals there (World Championships). Each year I say I want to make a certain final, I don't make it, so I'm looking forward and will be working to make it next year," Goule noted. "But I am certainly encouraged by my experience here at the Commonwealth Games."

"I have learned a few lessons. I have learned not to run other people's races, just to run my race, do what I do. Just now, I know I would have ran better if I didn't follow the girl from Uganda and just went in front of her, because we were going slow and that caused my poor time," Goule added.

Goule had earlier finished third in her heat in 2:03.62 and will now turn her attention to the remainder of the season and the build-up to next year's IAAF World Championship.