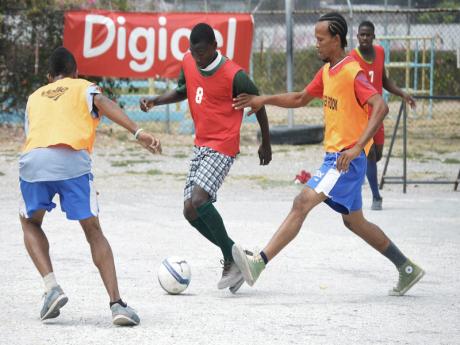 Once he gets the sponsorship support, Clive 'Busy' Campbell is keen to stage the Masters & Celebrities Peace and Love four-a-side football competition next year, which got major backing from Digicel.

The inaugural competition was held this year and ended recently. It brought together a number of teams from several inner-city communities across the Corporate Area.

"We decided to start it during the World Cup," said Campbell, who initiated the community event.

"The idea came about when the World Cup was on and the intention was to promote peace and love within the communities and to help with the reduction of crime," said Campbell.

"I'm looking forward to keeping it next year again, when the Premier League takes a break. It really brings joy to a lot of the communities."

"The matches were played early enough, starting at 9 a.m. and finishing by 10:45 a.m., so that people could leave to catch the start of the games (World Cup)," Campbell explained.

There were no cash awards, just prizes offered by a number of sponsors, Campbell explained.

"Digicel assisted by giving away credit to all participants, and they also gave away phones, as prizes, to the players in the different communities," he said. "There were also prizes provided by Western Sports, Kicks For Cause Foundation, Marley Coffee, Locker Room Sports, and Masters & Celebrities."