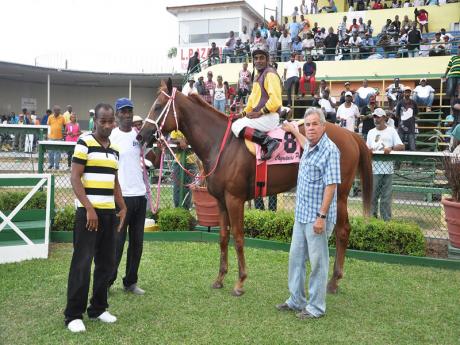 The talented three-year-old filly, BUBBLING ANGELINE, continued her meteoric rise to the top at Caymanas Park yesterday with a fast-time victory in the ninth running of the Betting, Gaming and Lotteries Commission Trophy open allowance feature over 1100 metres.

Installed an odds on favourite at 1-2 with former champion Percy Williams riding for 14-time champion trainer Philip Feanny, BUBBLING ANGELINE, who was third in the 1000 Guineas and second in the Oaks earlier this season, showed her preference for sprints with a decisive 11/4 length victory over stable-companion EL PODEROSO, the 5-2 second favourite, under champion jockey Dane Nelson.

Well away from the outside post position in a field of eight, BUBBLING ANGELINE was content to chase in-form SUNLIGHT EXPRESS (5-1), bidding for his fourth consecutive win - at close range passing the half-mile in a field of eight. But she always looked the more relaxed of the two and was sent through by Williams on the outside leaving the 600-metre marker.

Thereafter, she only had to be pushed out approaching the distance to win from topweight EL PODEROSO, who stayed on strongly in the closing stage, with the 47-1 outsider BORDER LINE coming from nowhere to clam third ahead of the well backed SIR VON at 7-2.

Williams, who was champion jockey in 1994 as the then lightweight rider for the Feanny stables, said everything went according to plan and it was smooth sailing in the end.

"She broke well on the outside and when I realised that SUNLIGHT EXPRESS was gunning to take her on up front, I raced close up on his shoulder passing the half-mile before asking her to run approaching the home turn. She duly ticked off her second consecutive win and is definitely going places," said Williams.

A chestnut filly by Blue Pepsi Lodge out of Miss Angeline, BUBBLING ANGELINE is owned by Howard Hamilton and bred by Everglades Farms Limited. This was her second consecutive win and her seventh from 12 career starts, with total stakes of $4.5 million.

On a day when Dick Cardenas rode two winners to inch ahead of Nelson (one winner) in the jockeys' standing - after both stated the day on 53 wins - the Patrick Lynch-trained HOLOGRAM SHADOW (6-1), with Cardenas aboard, made all to win the day's second feature for the Emancipation Day Trophy over 1300 metres, 1 1/2 lengths ahead of his more fancied stable-companion, PHINEAS, at 2-1.