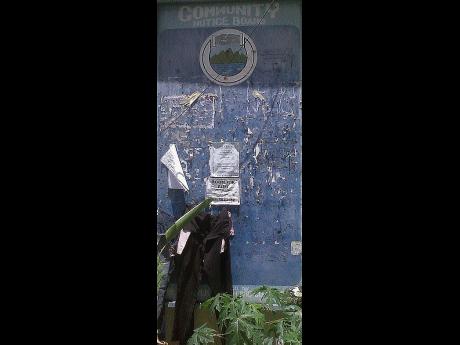 This community notice board which is affixed to the Lucea Police Station building, in the Bustamante Square in the town, is used as a clothes hanger by homeless persons. - Photo by Claudia Gardner

Head of the Lucea Development Initiative and former chairman of the Hanover Parish Development Committee, Nerris Hawthorne, has expressed displeasure at what she says is the shabby and unsanitary state of the town of Lucea in Hanover.

In an interview with Western Focus last week, Hawthorne listed a myriad of problems which she says have plagued the capital town over the years, but have been left unaddressed by the relevant authorities.

"Lucea is now a sad sight. On entering the town, one is greeted by broken-down rotting zinc fences, old unoccupied houses and drains full of grass and slimy water. We have a dilapidated sea wall, locked-up unfinished houses, burnt-out houses on the main street, posts hanging with black electrical wires close to the ground and garbage everywhere," Hawthorne said.

"We have a venture gutter that is overgrown and full of garbage. The seafront has black oil spilled all over the stones and the sea frontage is also full of garbage and the fishermen area is totally unsightly. It is a beautiful piece of land that is going to waste. We have traffic jams with buses full of tourist and they must wonder if they have entered hell because that's how it looks."

Hawthorne also took issue with the state of the Cleveland Stanhope Market and the buildings within the Bustamante Square, which is named after National Hero Sir Alexander Bustamante, who was born in the parish.

"The once beautiful town hall - the municipal building - is in a sad state of disrepair. Dogs lie with the homeless at the post office. The post office and notice board are used for hanging out their old clothes and people entering to collect their letters have to step over these creatures (dogs)," she said.

"The market is a disaster area. It is hot; there are pots and fire stones that can be seen in it where they cook inside the building. At the fish market, which was recently refurbished, the tiles have disappeared from the floor and it is now unsanitary. There is a supermarket with a drain beside it full of raw faeces; there is no order in the town; there is just disorder. There is garbage everywhere. The whole town looks like a garbage dump," Hawthorne said.

Turning to the road conditions in the town, Hawthorne said she was frustrated with the lack of attention being given to the welfare of especially pedestrians who have to use the streets daily. She also said the one-way system which was implemented in the town should also be dispensed with.

"The main street, when full of goods, delivery trucks have nowhere for pedestrians to walk. NWC has all but wrecked the roadway through the town in putting in a major water system. There is dust everywhere and potholes or ditches," she said.

"Those who are put to lead must lead from the front. It boils down to leadership," she said.