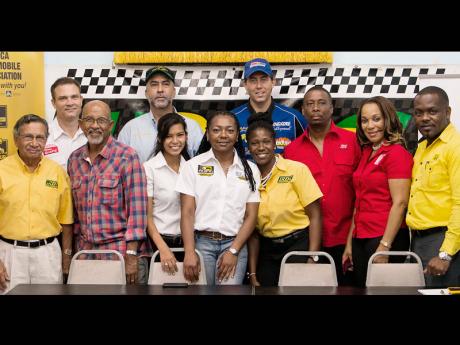 After almost a year of not racing at Dover, Doug Gore is hungry and ready for action - and so are hundreds of racing fans who eagerly await the Thundersport II event this afternoon. Gore should be severely tested by David Summerbell, Peter Rae, Chris Campbell and a number of other top drivers, as the Jamaica Automobile Association/Total Lubricants-sponsored Emancipation of Speed race meet concludes at the St Ann raceway.

"There is always an adrenaline rush each time I come back to race at Dover. I am looking forward to the challenge from David (Summerbell), who is one of the best drivers in the region. I am really feeling excited. The car (Audi TT) is ready for the challenging Dover circuit," said Gore, who was kept busy practising on Friday.

Summerbell will be offering fans a treat by challenging Gore in Thundersport II. "I will not be getting any points for this. I am doing this out of love for the fans and the sport," said Summerbell, who officially will be competing in the Modified Production Group 4 Class. However, Gore has promised to dethrone the 'King' and set a new lap record.

Peter Rae is anticipating that by the end of the day everybody should be screaming "Hoo-Rae". "Fresh from the CMRC event in Barbados, where I finished third overall on points in that leg of the championship, I'm hoping to excite the fans and give them what they come out to see. I plan to race head to head with the Audi," said Rae, who will be driving an Epping/DHL-sponsored RX7 Mazda.

Apart from the Thundersport II showdown, a lot of attention will be paid to Vivian Mitchell, who is building a strong reputation. Mitchell has a record of eight races and seven victories and all indications are that he is ready to continue where he left off.

Peter 'Zoom Zoom' Rae, Natasha 'Chiney Dolly' Chang and Gary Barrett, a Caymanian who came to the launch directly from the airport, all attended last week's official Emancipation of Speed launch. The competitors all promised explosive action for the spectators at yesterday's qualifying and today's race day.

Monique Gibbs, JRDC's communications director, said a quad (off-road four-wheeler) will be raffled at the meet, to be redeemed at the next race day. There will be local drifters, crazy stunt bikers and a children's village. Presold tickets have been reduced to $800 and there are other price cuts.

Duane Ellis, general manager of the meet's co-title sponsor, the Jamaica Automobile Association, lauded the meet for its safety record. He outlined plans to stage a Long Short Walk with over 400 walkers at 2:55 p.m. today at Dover, to focus on safety in driving and racing.

The other co-title Emancipation of Speed sponsor, Total, was represented by Andrea Stephenson, who promised that the Total drivers (David Summerbell, Andre Anderson and Kyle Gregg) will put on a good show at Dover, as usual.