Heal the family and save our nation 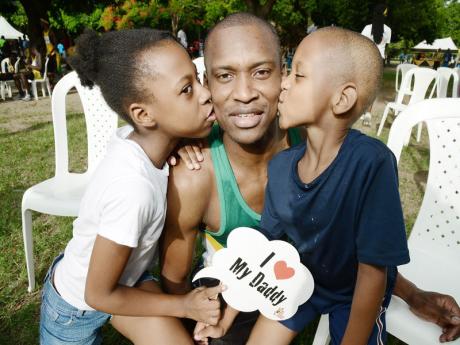 Asah Bailey gets a kiss from his children, Asanya (left) and Asah Jr, after the Everyone's a Winner Best Dressed Chicken Father's Day 5K and 7K road race at Hope Gardens on June 16.-Rudolph Brown/Photographer

One of the observations that impressed me most on our principals' visit to China in May-June was the value that nation placed on family. I observed it in the way I saw families walking together on the streets during a holiday weekend. I saw couples holding hands. I saw it when we were reading a wall in a secondary school where students wrote ambitions they had before dying.

Many of them wanted to visit other countries or vacation sites with their parents. I realise that family is an important facet of the Chinese culture, economic structure and future. This emphasis on the family as the basis of society has helped to make China strong, even if there are other areas of concern. This nation, which has a history of thousands of years, has realised that the family structure must be nurtured and protected if China is to achieve its destiny.

Jamaica is 52 years old as an independent nation. Our history has been shaped by traumatic events such as colonisation and slavery. These experiences have fractured the family structure our foreparents had in Africa. The deliberate attempt by colonisers to destroy the cohesion of the African people who were brought to the West Indies as slaves by demolishing the family bonds has had seemingly irrevocable consequences on our understanding and practice of family life. In Jamaica, we tend to comment on how the Chinese stick with each other as families, and then we add, "Black people dem jus bad mind and nuh look out for each other." The juxtaposing of those two descriptions captures in a nutshell what will be the triumph of a nation and the downfall of another.

It is a matter of urgency that we, as Jamaicans, regain what the colonisers have stolen from us. We must place at the centre of every effort to attain the Vision 2030 the healing of the family. It is with this vision in mind that Dr Michael Coombs envisioned and brought to birth the National Association of the Family. Dr Coombs pointed out the following:

"Healthy families are now recognised as key to national development by the UN, WHO, and International Pro-Family Organisations such as the Doha International Family Institute (DIFI) and the World Congress of Families (WCF) through their positive impact on social, health and economic indicators."

"Parenting is probably the most important public health issue facing our society. It is the single largest variable implicated in childhood illness and accidents; teenage pregnancy and substance misuse; truancy, school disruption, and underachievement; child abuse; unemployability; juvenile crime; and mental illness. These are serious in themselves, but are even more important as precursors of problems in adulthood and the next generation ... ."

As an educator, I am aware that the strength of our family structure in Jamaica is weakening even further. The increase in sexual abuse of our youth, the feeling that each man or woman is looking out for themselves, the fuelling of the sense that self-sacrifice is the way for fools and 'idiat', the perception that what is important is a quick way to 'mek a money', all combine to shape a culture that results in a 'dawg-eat-dawg' nation.

This is the opposite of a nation that values family, that cares and protects its young, that insists on discipline and education for its growing youth, that requires respect to adults and from adults, and that honours and provides for the elderly. It is this type of nation Dr Coombs envisages that the National Association of the Family (NAF) will work with other stakeholders, such as the National Parenting Support Commission, to realise.

The vision of the National Association for the Family is 'A healthy and productive nation built on the pillars of healthy families in the context of Vision 2030'. Its mission is to facilitate transformation to a nation state where social well-being, health, values and attitudes emanate from a sustained foundation of healthy families. The mandate is to advocate for, and support, the development of national legislation and policies that protect and promote the family and all its elements through multi-stakeholder involvement, bearing in mind those already in existence; to advocate for, facilitate and support the strengthening/development and implementation of family life interventions statewide in collaboration with other stakeholders, building on what already exists.

One of the first initiatives of the organisation is to address, along with other stakeholders, the issue of fatherlessness. The absence or non-involvement of fathers in their families has been established by research to have a devastating impact on the social fabric. From early childhood through adolescence to adulthood, children of fatherless homes are at a distinct disadvantage when compared to those parented by both mother and father. With 85 per cent of children born out of wedlock, 50 per cent born to unregistered fathers and more than 50 per cent of households headed by females here in Jamaica, the need to address fatherlessness is irrefutably an urgent one.

To bring focus to this area of concern, the NAF organised marches by fathers in various towns on June 14, the day before Father's Day. The march in Mandeville was highlighted on national television. This was a symbolic signal that our fathers are intending to take back the next generation by fulfilling their God-given roles and responsibilities.

I salute the work of the NAF, the National Parenting Support Commission, and the I Believe Initiative for their focus on restoring the strength of the families to our Jamaican society.

In this week where we celebrate our Emancipation and Independence as a nation, we must realise that unless we heal the family, we cannot heal our nation.