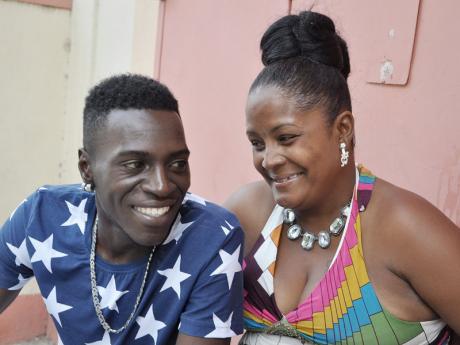 Kirkland Ross and his new wife, Shamar Esson, who tied the knot at a mass community wedding in Dunkirk, Kingston, just over a week ago, speaks with The Sunday Gleaner, a few days after the event, about how they met and fell in love. 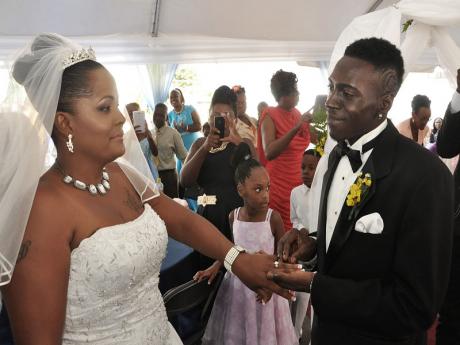 Kirkland Ross and his bride, Shamar, tie the knot at the mass community wedding in Dunkirk on July 26. -Jermaine Barnaby/Photographer
1
2

Kirkland Ross was a policeman on patrol in east Kingston in 2005 when he met a woman who said her name was Shawna.

Ross, a constable, was the lookout in the vehicle being driven by a senior member of the Jamaica Constabulary Force when he saw a girl he described as "slim and sexy".

Simultaneous with his sighting of the girl, his squaddie mentioned that a woman was relocating within the community and needed police presence. But the striking good looks of the woman jolted him and forced him to ask his driving partner, "a who dah B deh, bredda?"

Ross and some of his close squad members all wanted to have girlfriends before the end of 2004. While the others each found their girl, he did not. In early 2005, he supervised her "moving exercise" and during the encounter he asked for her cell phone number and she obliged.

Two months passed before he saw her again, but not with the long flowing hair of the earlier months. This time she wore low-cut bleached hair.

He shouted "Shawna" several times, but received no response.

It occurred to him that her name wasn't Shawna, but he never forgot her face. It was the face he saw when he closed his eyes. It was a face he had to see again.

"So mi tell her nuh fi deal wid man dem way deh. After that she said her name was Shamar," said Ross, moving easily between fluent English and Patois.

Last week, Shamar Esson was still wearing the upsweep hairstyle she wore to her wedding two Saturdays ago at the Dunkirk multipurpose sports complex. She was 15 years old when she became a mother and by age 20 had three children.

"I lived in Portmore in Mommy's house. But when you take up big woman things you have to take on big woman responsibilities. So my friend who lived in Dunkirk said I could come and stay with her," she recalled.

With a child to feed, she worked at a wholesale in downtown Kingston but, she said, the pay wasn't enough and the work was too hard.

She began selling newspapers for The Gleaner at the intersection of Constant Spring Road and Dunrobin Avenue, and would do so until the birth of her sixth child in 2006.

"I was also a party girl and a party promoter. I was also a church girl, Apostolic. I am used to the tongues speaking and handclapping and I know I would return sometime. The church was never too far away from my heart," she said, sharing her story on Wild Street in east Kingston.

Both Shamar and Kirkland had the church in common as Kirkland's mother was a pastor.

"The church was and is always in my heart," said Ross, who spent the first 19 years of his life in St Ann where he was born. He then moved to Kingston to take up policing duties.

He spent nine years as a constable before he was interdicted in 2012.

He has a case currently before the courts.

"I never had a comfort zone. It was murder scene after murder scene, crime scene after crime scene. If it wasn't (Dun)Kirk, it was Rae Town, Franklin Town; it seems like the entire Kingston was on fire. But when I left the road I never carried the job home," he told The Sunday Gleaner.

A home is what Shamar and Kirkland created for themselves almost 10 years ago, as their love grew from that first sighting in 2005 to their marriage on July 26.

They not only found love, but kept it alive and strong. Her decision to be baptised on May 27 made her living arrangement unacceptable in the sight of the church and, after counselling from Pastor Munroe Allen of the Encounter Ministries International and his wife, a month later she became Mrs Kirkland Ross.

"I didn't even know we were getting married. After I spoke to the pastor about our living situation, he said he would talk to him (Kirkland). All he said was, the pastor spoke to me and I am going to do the fitting. I didn't even know he was serious. It was later in the night when we were reasoning that he said we were going to get married," she said, looking lovingly at her new husband, as the two shared their story with The Sunday Gleaner.

They were one of eight couples married in a mass wedding just over a week ago. The church sponsored the weddings and all they had to do was show up.

Their dream is to, in the next 10 years, have their own home, send their children to college, and be stronger in God and in their married life.