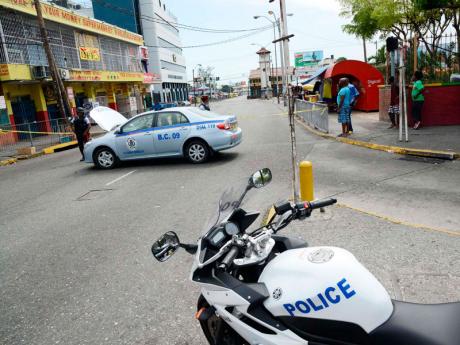 These police service vehicles were parked at the scene of yesterday's shooting in Half-Way Tree, St Andrew, where a man, said to be of unsound mind, disarmed a policeman and shot two persons. The man was shot and injured by an off-duty policeman. - Rudolph Brown/Photographer

The police constable who was reportedly disarmed of his firearm by a man believed to be of unsound mind in Half-Way Tree, St Andrew, yesterday was not using one of the standard regulation holsters for the Glock pistols, investigators have revealed.

Instead, one investigator revealed the policeman was using a holster that could not properly secure his service weapon.

"A one a dem cowboy holster him did have," the investigator told The Gleaner, suggesting its vulnerability to safety breaches.

According to a senior police officer, the Glock pistols widely used by members of the Jamaica Constabulary Force (JCF) come with a standard holster that carries a button that must be depressed before the weapon can be released. Other standard JCF holsters carry a strap that secures the weapon.

Assistant Commissioner Devon Watkis, who heads the Criminal Investigation Branch (CIB), made it clear that he did not have all the details about the incident, but pointed out that the JCF has a clear firearm policy that speaks to the keep and care of weapons and other accoutrement issued to members.

Watkis said the policy serves as a guide for commanding officers or their nominees when they are deploying police personnel.

"I am sure that in circumstances where issues are raised and if there are deviations from that policy, then there has to be an explanation from the persons responsible," the CIB chief explained.

Two civilians - a woman holding child; and a man - were shot and injured after the attacker reportedly approached the police constable and grabbed his service weapon from the holster and began firing indiscriminately.

One eyewitness reported that the constable did not see the man approach him because he was writing a motorist a ticket.

Eyewitnesses say the man was quickly challenged and shot several times by a policeman in the area.

By late afternoon, the Corporate Communications Unit (CCU) of the JCF confirmed that the three shooting victims had been hospitalised, but said there was no information on their identities or their condition.

"A policeman who was off duty responded and opened fire, hitting him. The firearm was retrieved and all three individuals were taken to hospital, where they are currently undergoing treatment," the CCU said.