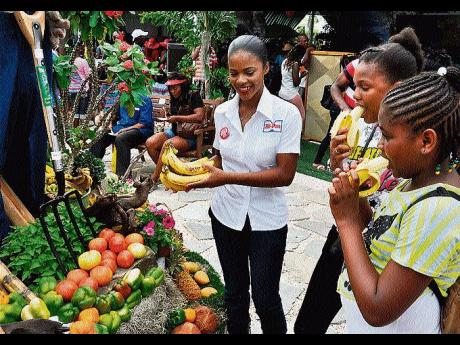 Hi Pro's Sherrae Wong (left) gave samples of bananas to Rihana James (centre) and Gabrielle James as they toured booths at the 62nd staging of the Denbigh Agricultural and Industrial Show in May Pen, Clarendon, yesterday. - Jermaine Barnaby/Photographer

"When we don't produce and have high cost of imported goods, our economy weakens. Yes, we operate in a global economy, which makes it impossible for us to totally close our borders to imports. But, we must eat what we grow and grow what we eat," the governor general said.

Sir Patrick was addressing the opening of the 62nd staging of the Denbigh Agricultural and Industrial Show in May Pen, Clarendon, on Emancipation Day.

Meanwhile, the governor general said the country "needs to support" young entrepreneurs who have been making waves.

"We must always be proud of Brand Jamaica and build brand recognition for products other than the well-known coffee, cocoa, jerk sauces and rum. Many of our young entrepreneurs ... are doing just that, and we need to support them," Sir Patrick said.

He stressed the need to consume locally grown produce, which is not only tasty, but full of nutrients and good for a healthy lifestyle.

"We read about the benefits of our tropical fruits and herbs for preventing cancer, reducing the risk of heart diseases, and helping to control or even reverse diabetes," he said.

According to Sir Patrick, given the illnesses scientists are now associating with genetically modified foods, this "makes it even more important for us to build our strength and our health by eating locally produced foods".