'We're on the podium!'Sunshine Girls revel in bronze medal success 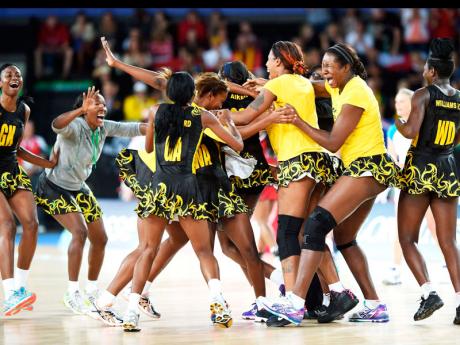 It was war, literally, but when the dust settled on an intense, physical third-place play-off inside the SSE Hydro, even the pro-England crowd had to applaud Jamaica's Sunshine Girls, as they came out 52-48 winners - a glistening Commonwealth Games bronze medal their reward.

It was also Jamaica's second netball medal at the Common-wealth Games, after winning the same colour in 2002 at the Manchester, England, edition of the championships.

Australia beat New Zealand 58-40 in the gold medal match, which followed at the same venue.

Dubbed world netball's 'other great rivalry' after New Zealand-Australia, clashes between Jamaica and England have produced some true classics. Jamaica defeated England to bronze at the 2003 and 2007 World Netball Championships; winning by four and one point, respectively, while England enjoyed big wins at the 2011 World Champs and 2010 Commonwealth Games.

The latest face-off was just as electrifying, with both teams going at each other from the opening pass to the very last whistle. With constant lead changes, goal-for-goal shoot-outs and a ton of contacts, the teams went into each break England 13-11, 24-25 and 37-37, before the Jamaicans forced an English turnover with three minutes to go in the fourth quarter, and drove the final nail in their old foes' coffin with two more interceptions and effective shooting at the other end.

The Jamaicans were already jumping up and down on the bench as the clock wound down and when the umpire sounded the final whistle, the Sunshine Girls crumbled to the hardwood in raw emotion; hugs, tears, screams of joy - as the Brits hung there heads after another tough lesson at this championship.

"We are so elated. These girls went out there and decided it was all or nothing today, and that's what we did on court," said coach Minneth Reynolds, struggling to catch her breath. "It was either a bronze or nothing, we had a long talk last night (Saturday), we had another this morning (yesterday) and it was underlined that there were no more chances, we had to go for it and they did just that.

Captain Nicole Aiken-Pinnock, who had two interceptions and two defections at the goalkeeper position, praised her team's determination to bounce back from Saturday's semi-final loss to Australia.

"We came to this Commonwealth Games for a gold medal, we played New Zealand and lost, we played Australia in the semis and lost. The gold medal didn't happen, but when we recognised we were out of the final, we had to do some self-check last night (Saturday)," Aiken-Pinnock shared.

"We had a meeting after the general team meeting and we spoke about a lot of things and persons left really feeling bad and knowing that today was a different day because we did not have any other chance or time," Aiken-Pinnock added.

"We are so happy, we are very happy for this win. We needed this, a lot was riding on a medal here and we stuck together as a team, we stuck to the game plan and we played four solid quarters. I'm really proud of myself and my team, give thanks to God," said Jamaica's top defensive player on the day, Vangelee Williams, who had two interceptions and three deflections.

"Mi just send dem out deh and tell dem fi deal wid it and dem deal wid it," joked 400m hurdler Leford Green, one of several Jamaican track-and-field athletes who came out to support their countrywomen.

Jamaica limited England to 11 goals in the fourth quarter and forced them to turnover the balls six times.

But in Romelda Aiken, the Sunshine Girls possess a truly world-class player - at both ends of the court - and with the goal shooter bib on her kit yesterday, the lanky ANZ star lifted the team with her tenacity and fighting spirit up top.

Aiken took a beating in the arc from England defenders Geva Mentor and Stacy Francis, but the big Jamaican dished out her fair share; an unmoveable object in a feisty game, as she scored 44 goals from 52 attempts, with Shanice Beckford - perhaps the smallest player on the court - adding eight from 15 tries. Paula Thompson assumed the chief playmaker role in the absence of Sasher-Gaye Henry, who was injured, with 22 assists.

Joanne Harten scored 26 from 29 for England, while Kadeen Corbin added 22 from 26.