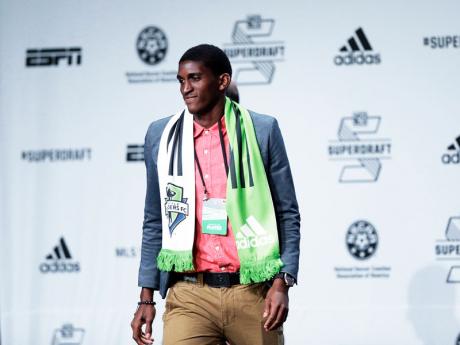 Damion Lowe walks on stage after being selected by Seattle Sounders FC in the 2014 Major League Soccer SuperDraft. - File

Injury derailed Damion Lowe's dream start to professional football, but the Jamaica youth international vows to get his first Major League Soccer (MLS) season back on track and finish strong.

The 21-year-old defender, selected eighth in January's MLS SuperDraft by Seattle Sounders, expected playing time as a rookie in North America's premier league. But an April surgery to repair a torn muscle near his hip/back wrecked Lowe's hopes.

However, he returned to his first team training on July 31. Lowe is still barred from contact drills, but plans to be ready soon.

"By mid-August, I should be game-fit," Lowe said last Friday. "I had been practicing on my own, with the trainers on the side, for about a month."

His pre-injury pace and mobility are back. He jumps without discomfort.

"The surgery was successful, and there were no setbacks," he said. "I haven't lost any range of motion or speed."

However, his months of inaction were especially "disappointing", Lowe explained, because he had begun adapting to pro football before he was injured.

"I was catching form," he said. "I was playing well, but I got hurt ... . At that time, I saw where I could have gotten playing time. There were injuries (in Seattle's defence)."

Lowe said he has received full support from Seattle throughout his rehabilitation, making the gruelling rehab bearable. He said his teammates offer constant encouragement.

"All the players motivate me," he stated. And he plans to reward their confidence.

"Regardless of whether [or not] you are a rookie, they expect you to perform at the highest level," Lowe said. "You can see they have trust in everyone."

Lowe, along with André Blake and André Lewis, has made history. It was the first time that three Jamaicans were among the top-10 SuperDraft selections. But 2014 hasn't always been kind to the heralded rookies. None have played in the MLS. Blake is on Philadelphia Union's bench. Lewis, sent on loan to a lower league club by Vancouver Whitecaps, suffered a season-ending knee injury.

Lowe aims to reverse the trend.

"Being drafted number one, number two, number eight, it has a meaning and no meaning," he explained. " ... You still have to contribute ... . You have no control over injuries, but you just have to recover and come back stronger."