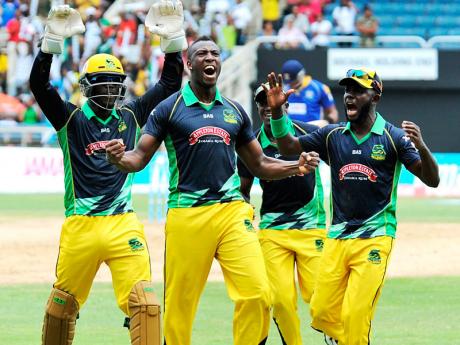 Jamaica Tallawahs fast bowler, Jerome Taylor, made good of the Sabina Park pitch as his team won all three home games in four days to put themselves in a good position to retain the Limacol-sponsored Caribbean Premier League Twenty/20 cricket title.

Taylor picked up two wickets for 11 runs in two miserly spells off his four overs and was adjudged Man-of-the-Match in the Tallawahs win against Barbados Tridents yesterday. He grabbed three wickets against the Guyana Amazon Warriors on Saturday after his four against Antigua Hawkbills two days earlier.

Tallawahs batted first and amassed 147 for eight off 20 overs, then restricted Tridents to 128 for six.

Taylor who became the Jamaica Tallawahs' top wicket-taker with 11 in seven matches, says their success is due to a great team effort.

"We're entering the business end of the tournament and we are gelling as a team. Now, we have three games to go in the preliminary stage and the plan is to continue winning," Taylor said.

In his team's first four games, Taylor picked up only two wickets, but has flourished since coming home.

"I assessed the Sabina Park wicket and came up with a plan," he explained. "Thanks to my teammates, management staff, as well as the crowd that played a big role. Sabina Park is a good place for me. It is a happy hunting ground.

"We are getting there as a team and gelling. The team is pulling in the right direction and the camaraderie is very good," Taylor noted.

Personally, Taylor says he has been working very hard, after coming back from back an injury that sidelined him for over three years.

"I'm trying to do everything in my power to stay injury-free as the West Indies home series is next," he said.

Jamaica Tallawahs will next play St Lucia Zouks on August 9 in St Lucia.