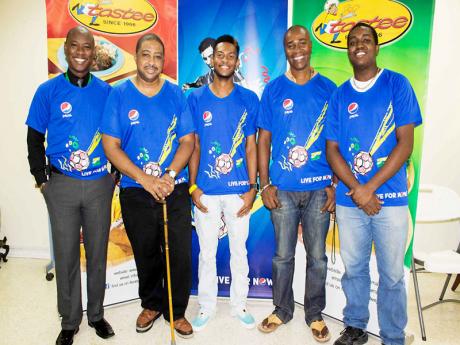 Winners in the Pepsi Cash Kick Off promotion (from left) Dedrick Gordon, Orlando Goodison, Mark Calloo, Donovon Barrett and Dean Michael Gordon, are all happy to receive their winnings at a presentation at the Tastee Head office, recently.

The second set of lucky winners in the Pepsi Cash Kick Off promotion were announced recently at the Tastee head office in Cross Roads, Kingston.

The five winners were Donovon Barrett of Kingston, Dean-Michael Brown of Montego Bay, Dedrick Gordon of Kingston, Orlando Goodison of Duhaney Park and Mark Calloo of May Pen. They each purchased a yellow-capped Pepsi, went online to Pepsi Jamaica Facebook page and entered the code found under the cap.

Donovon Barrett, one of the winners of $100,000, said most of his winnings would be spent on back-to-school expenses and purchasing a case or two of Pepsi to cool down the heat for the summer

A very happy Dedrick Gordon said that his winnings, simply put, would go towards debt consolidation. Mark Calloo, on the other hand, said his $100,000 would be put towards his one-year-old son, Rashaun Calloo's future.

Orlando Goodison does not have any immediate plans for his $100,000, but was very excited that he had won it nonetheless.

Dean-Michael Brown, who obviously came from one lucky family, as his father was one of the winners of a Reggae Sumfest ticket given away by Pepsi Cola Jamaica in Montego Bay last week, said he would be saving his winnings.

The promotion, which runs until August 13, will select five winners each week for the cash prize of $100,000.