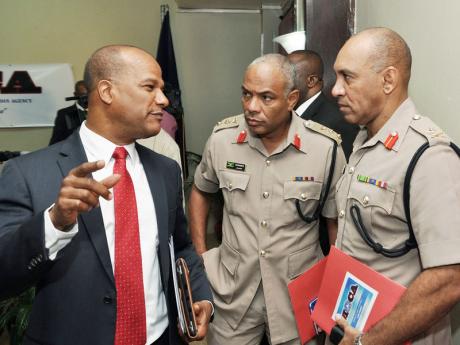 The parliamentary Opposition is supporting the merged intelligence entity announced by National Security Minister Peter Bunting, but has raised concern that the reporting mechanisms for the newly formed police agency could breach the law.

Derrick Smith, the opposition spokesman on national security, described the move as logical and positive. "This initiative is long overdue," he told The Gleaner.

However, he later told The Gleaner Power 106 News Centre that the security minister must urgently make a clear distinction between what performance matters would go to the National Security Council.

"Reporting to the security council on policy is acceptable, but there is a thin line between performance and operational activity, and this is where there is conflict and perhaps this needs some clarification. It's very important, in that the Constabulary Force Act clearly divides the responsibility of the minister, as it relates to policy, and the responsibility of the commissioner, as it relates to operation."

The Gleaner Power 106 News Centre also quoted him as saying that he did not anticipate that the new formation would result in any significant improvement in police work.

Bunting yesterday announced the immediate merger of the Major Organised Crime and Anti-Corruption Task Force (MOCA) and the Anti-Corruption Branch, even as members of the diplomatic corps, particularly representatives of the United States Embassy, were noticeably present at yesterday's press conference where details of the merger were revealed.

Bunting disclosed that the merger was an interim measure and a precursor to the establishment of a supranational law-enforcement agency.

In amalgamating the Jamaica Constabulary Force's (JCF) two premier intelligence agencies, Bunting confirmed reports by The Gleaner that his Government was shooting for plans to set up an FBI-like national entity to target criminals.

Bunting said the merged entity will be called the Major Organised Crime and Anti-Corruption Agency, retaining the MOCA acronym. "This merger is an interim step in a longer-term plan to create a national law-enforcement agency, which will be the subject of a future Cabinet submission," said Bunting.

The new entity, to be headed by Colonel Desmond T. Edwards, who has been seconded from the army for a transitional period to oversee and coordinate the merger, "will have the capacity to conduct independent investigations and report to the National Security Council, through the minister of national security, on matters of policy and performance," the minister disclosed.

Added Bunting: "It will also continue to work with other government entities, particularly the Financial Investigations Division from the Ministry of Finance, as well as the Passport, Immigration and Citizenship Agency, Jamaica Customs Department, the Revenue Protection Division, the Registrar General's Department, and Tax Administration Jamaica."

The national security minister disclosed that a steering committee, chaired by the permanent secretary in the Ministry of National Security, Stewart Saunders and including senior officers of the JCF and JDF, will have oversight responsibility for policy implementation of the agency.

"Through this committee, the agency's work will be monitored and the results made available to the general public as appropriate," the minister promised.

He said the current National Security Policy (NSP) identified, like many reports over the past decade, that crime and corruption were the principal obstacles to Jamaica's growth and development. "The NSP also recognised a common misconception that the way to make progress against organised crime is to disrupt specific forms of criminal activity, e.g., narcotics trafficking," he added.

However, he said, the traditional approach does not allow for the flexibility and adaptability demonstrated by successful career criminals, who have been adept at identifying and moving into new areas of illegal activity.

He also suggested that the merger will address existing overlaps between the two agencies in tackling serious organised crime and stamping out corruption.

Bunting emphasised that there was still a long way to go, but stressed that he expected this measure to result in greater effectiveness through better use of limited resources.

"The new agency will give us greater reach and increase our capacity to carry out investigations on people of interest, including the police and those in public office, and this will, in turn, produce an enhanced capability to prosecute criminals," he said.

Smith also had positive words for the new MOCA chief.

"He (Edwards) has displayed proven competence and has the capacity to do a good job in his new role," said Smith. "I would recommend that consideration be given to merge the Bureau of Special Investigation and INDECOM, as this move could save the Government approximately $100 million annually."