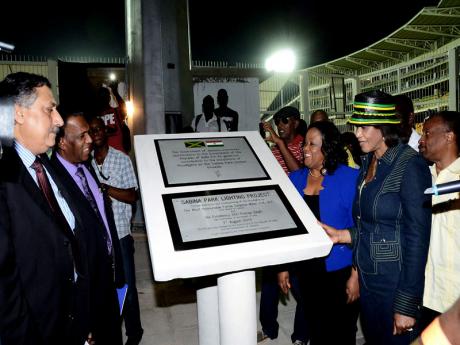 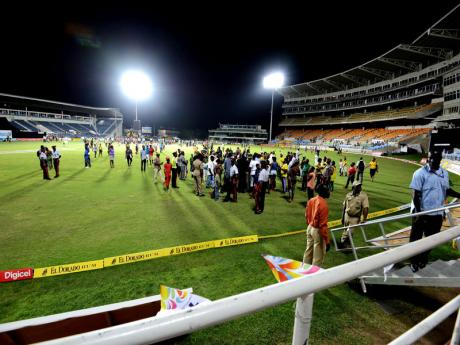 Two of the four towers of lights shine in the background as people stand on the field following the official ceremony to turn on the newly installed lights at Sabina Park on Sunday night. -Photos by Winston Sill/Freelance Photographer
1
2

The four towers of lights for the project - at a cost of US$2.7 million - were officially turned on at 7:50 p.m. on Sunday night at the request of Prime Minister Portia Simpson Miller.

The lighting project is as a result of an agreement between the government of the Republic of India, who provided a grant of US$2.1 million, with the balance provided by the Tourism Enhancement Fund.

A memorandum of under-standing covering the agreement was signed between the governments of India and Jamaica four months ago at the same venue.

"It is with great pleasure and pride that I turn on the new floodlights at Sabina Park," the prime minister declared.

Shortly after, the energetic Simpson Miller sprinted off and unveiled a plaque at the east side of the ground to commemorate the occasion.

"I met with Minister Neita-Headley (Natalie) and Dr Akshai Mansingh and H.K. Mohan of India for a discussion and the rest is history," recalled Heaven, of a discussion he had regarding the lights after taking over as JCA president last October.

"I wish to thank the PM who gave full support towards the project, Minister Natalie Neita-Headley, the Indian government, the JCA, and especially Dr Mansingh, Kingston Cricket Club, the project management Urban Development Corporation, FosRich, and others for making the project possible," he said.

Heaven also maintained that the venue must be used for other events and not just cricket.

Earlier, Natalie Neita-Headley, minister with responsibility for sports, said that the project is as a result of contributions from many entities.

"The project embodies all the hallmarks of teamwork. Two years ago, discussions started on the issue of (new) floodlights at Sabina Park in Kingston," Neita-Headley told the gathering on Sunday night.

"I thank Dr Akshai Mansingh, who led me to the government of India. We had to find a way to make it possible, it is a partnership of those who are like-minded," she added.

"We have installed four towers of state-of-the-art floodlights and I want to acknowledge all who played their part in making the project possible. FosRich (the project contractors) delivered on time and within budget, so we are grateful for the bilateral cooperation between both countries," she disclosed.

Meanwhile, H.K. Mohan, charge d' affaires for India, said that his government agreed to assist Jamaica in order to strengthen the bilateral ties between both countries.

"It is a pleasure to be here on this occasion. We provided US$2.1 million for instalment in the lighting project. The money was released in two instalments. It is towards goodwill on both sides," Mohan stated.