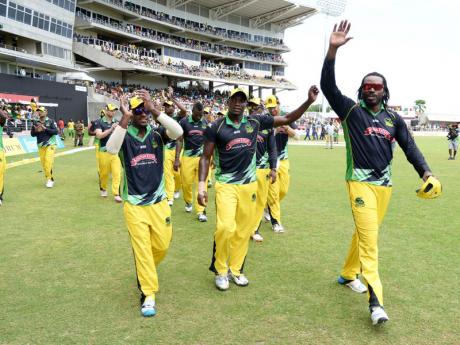 Captain Chris Gayle (right), Jerome Taylor (centre) and Jermaine Blackwood lead members of the Jamaica Tallawahs as they do a lap around Sabina Park and wave to fans in saying thanks for their support, following their victory over the Barbados Tridents in the Limacol Caribbean Premier League Twenty20 cricket match on Sunday.-Ian Allen/Staff Photographer

Chris Gayle, captain of the defending Caribbean Premier League (CPL) champions the Jamaica Tallawahs, believes his team, while experiencing a few hiccups, is coming together at the right time.

This, he states, is a very critical development, since he wants the Tallawahs to be the top team when the preliminary round of matches is complete.

Following a clean sweep of their homes matches over the Antigua Hawksbills, Guyana Amazon Warriors and the Barbados Tridents from Thursday to Sunday, the Tallawahs are second in the standings behind Trinidad and Tobago Red Steel. Both teams have six wins from seven games, but Gayle wants the Tallawahs to overtake their Trinidadian opponents, who lead on net run rate, since the top team gets an automatic berth in the 2014 finals.

"It's very important (that the team is playing well together); the number one team goes straight to the final, so that's a big, big target," he said, as the adoring crowd rained cheers down on him after his team survived a scare to win by 19 runs over the Tridents on Sunday.

"We're looking to cross that milestone and, hopefully, we can get there."

There is still a lot of work to be done, he said, about the team that so far this season is among the strongest in the competition.

"We set out a plan to win all our home games, and we did that," he said, while heaping praise on his bowlers, who defended a relatively modest total in Sunday's win over the Tridents.

"The good thing about it is that we are not just batting and winning games, our bowlers have actually been winning games for us, so that kind of makes things much easier for us going into St Kitts."

However, Gayle, who had scores of 59, 22 and 39 in the three home games, thinks there is still a lot of work to do to ensure that they claim the automatic final berth. Collapses in the middle order of the batting, for example, are still a cause for concern.

"The batting has been up and down. That's something we have to look at and, hopefully, we can get it right. But once the batting really clicks, I am sure any total over 170 or 180 will make it easier for our bowlers; but this is cricket. Sometimes, the wicket doesn't give you that freedom to play your shots, and you have to take that into consideration, but all in all, I am happy."