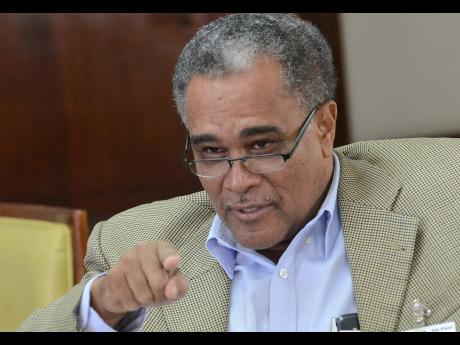 Rudolph Brown
Dennis Morrison, chairman of the Jamaica Tourist Board.

Karisma Hotels and Resorts, a fast-growing, Florida-based operator of theme and high-end boutique properties, yesterday announced plans to build 4,000 rooms on Jamaica's north shore over of the next decade.

The first 1,200 or so are to be opened in time for the 2017-18 winter tourist season after two years of construction.

The company plans to invest upwards of US$900 million on the project, which is separate from the US$45 million it is spending on a 149-room property, to be called Azul 7, now under construction in Negril, on Jamaica's west coast. That property is next door to the 138-room Azul Sensatori, which used to be part of Gordon 'Butch' Stewart's Sandals inventory, but is now managed by Karisma on behalf of itself and partners that include TUI of the United Kingdom.

"Karisma was so very impressed with the performance of their first resort, which is in Negril, that they moved immediately to identify land to expand their presence in Jamaica," said Dennis Morrison, chairman of the Jamaica Tourist Board.

"That first resort, immediately on its opening, was running 100 per cent occupancy, which is most unusual in the tourism industry," he said.

Ruben Becerra, Karisma's vice-president for corporate affairs and business development, told journalists that 4,000 rooms will be spread across nine hotels to be developed on 228 acres of beachfront land in Llandovery, St Ann, which clearly marks the area as a potential new growth area for Jamaica's tourism.

Becerra would say only that the land for the development, with nearly a mile of white sand beach, was being acquired from "the private sector".

"This is going to be one of the greatest developments that we are focusing on right now," Becerra told journalists at a press conference hosted by the Jamaica Tourist Board (JTB).

Launched 15 years ago by Rafel Feliz, the CEO, and Executive Vice-president Lubo Krstajic, Karisma has expanded rapidly, helped, in part, by its strategic alliance with the TUI Group, the world's largest integrated travel company, some of whose luxury brands its operates. In fact, Becerra said the partnership with TUI, which operates six airlines, helped drive the success of Sensatori Jamaica since it opened in April last year.

TIU, he said, increased airlift to Jamaica by more than 108,000 seats annually, "representing an additional one million guest nights per year". It is this kind of alliance that apparently causes Karisma and Jamaica's tourism officials to be confident in the project, stretched over a 10-year horizon.

Becerra refused to be drawn on the funding details of the Llandovery project, saying that would depend on "the completion of the master plan" for the development, which is now being finalised, but appeared to suggest that the company could consider tapping the Jamaican market for some capital.

In a June interview with the online journal Travel Agent Central, Feliz and Krstajic spoke of plans for "a big development in Jamaica that will total 1,200 rooms", for which they were in the process of acquiring the land. Since then, they apparently expanded on that vision.

Ironically, Felix credited the company's vice-president for sales - who formerly held a similar position with Butch Stewart's Miami-based global marketing company, Unique Vacations - for Karisma's initial foray into Jamaica, where, according to Becerra, the group has found a good environment for tourism and for doing business generally.

"We believe it is going to be very, very stable," he said of Jamaica in relation to the 10-year-horizon for the Llandovery roll-out.

Based on the remarks by Feliz and Krstajic in a summer interview, Llandovery is likely to accommodate a range of the brands that fall under Karisma's umbrella, and, according to Becerra, their project, which is expected to create 8,000 direct jobs - and another 5,000 indirect ones - should be catalyst for other international brands to come to Jamaica.

"Our interest is to try to increase the market. I will be happy to talk about that in the future, but we are still cooking and preparing those alliances. When the time comes, I will let you know what brands those will be," he said.