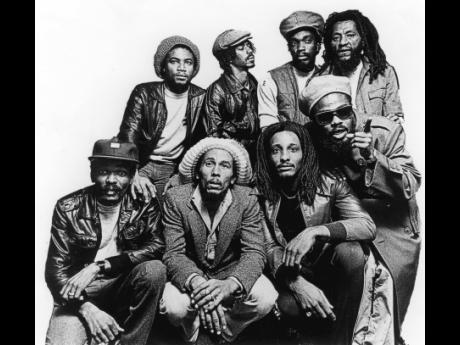 What if you were asked to name only three of your favourite reggae books? How would you select just three from 50 years of writing about reggae? That's exactly the challenge Toronto literary critic Donna Bailey Nurse asked me to consider. It forced me to think about the criteria I would use to arrive at my choices for a shortlist.

First, I decided to disregard all those large, exquisitely designed coffee-table books. If you are at all familiar with reggae books, you know the ones. They roughly fall into two categories: The Bob Marley biography told through attractive images surrounded with unsubstantial text; and books, using the same approach, that feature an assortment of reggae musicians, singers and producers. I'm not against the glossy photographs in those books, but

typically the writing in many of them doesn't possess the craft or analytical depth to position them as more than just average.

While I remain a huge fan of Bob Marley, I had to exclude all those biographies of him that recycle the same information without offering any new insights or perspectives. I also steered clear of books with a one-track vinyl-collector's perspective. They often trade in disembodied anecdotes divorced from any social or historical context. They fit Amiri Baraka's description, in his book, Blues People, of certain jazz writers as 'gee whiz hobbyists'.

After all that whittling down, what's left? Well, some of the most alluring and powerful reggae writing can be found in poetry and fiction. Lorna Goodison, Kamau Braithwaite, Anthony McNeill, Bongo Jerry,

Mervyn Morris, Kwame Dawes, Colin Channer, Christian Campbell, Nalo Hopkinson, Marlon James, Kei Miller and Ishion Hutchinson are just some of the gifted Caribbean poets and novelists whose work has engaged the music. Whether they explicitly discuss reggae or not, their writings are often steeped in its rhythms, themes, and overall aesthetics. Despite the literary quality of those works, I decided to focus on non-fiction.

When no one outside the Caribbean thought to write about the music, Gordon Rohlehr, Garth White, Verena Reckord and Dermot Hussey were there to pioneer the analysis. None of them, though, wrote complete books on the subject. I also realised that I could not really include the innovative analysis and crisp writing of Garnette Cadogan on Bob Marley or Ken Bilby's outstanding and accessible scholarship on hand-drumming. Why? Their essays do not assume book form.

Then there is Marlon James. His GQ article on Bob Marley as style icon raises the bar on reggae non-fiction. He finely tunes his discussion of Bob's roots fashion with the appropriate social context, then weaves in a brief history of Bob's musical journey to black rock star.

Jah Music by Sebastian Clarke (now Saakana) is a book that deserves highlighting as an engaging, innovative work. Heather Augustyn's biography of Drummond must also be mentioned. Her research into the lives of Drummond and Margarita uncovers valuable information. And the late Timothy White deserves a shout-out for the quality of his writing in his Marley biography, Catch a Fire. Sadly, though, I am limited to only three selections. Here, then, are my picks (not in order of priority or preference):

The 16 essays in Global Reggae represent a unique collection of writing about this universal music. From various countries around the world, historians, journalists, scholars and, yes, even a collector of reggae on vinyl all discuss the impact and influence of the music on their domestic cultures. Many of these contributions began life as keynote presentations delivered at the first Global Reggae Conference held in 2008 at the Mona campus of the University of the West Indies (UWI) in Jamaica.

Carolyn Cooper, the editor of this collection, was one of the main organisers of that event. In addition to her role as an English professor, she has written about the genre for several years and is founder of the university's Reggae Studies programme.

about Cuba. Leonardo Vidigal on Brazil, Teddy Isimat Mirin on the French Caribbean, Brent Clough on Oceania, Marvin D Sterling on Japan, Ellen Koehlings and Pete Lilly on Germany, Amon Saba Saakana on Britain, Roger Steffens on America, and African American musician and writer Michael Veal writes about dub. I unpack the history of the music in Canada.

All of the writing in this collection is interesting. There are some that deserve special attention. ChudeSokei's 'Roots, Diaspora and Possible Africas' is an excellent meditation on how Africa engages with the portrayal of itself in reggae, a music crafted in its diaspora. Sterling, as a Jamaican who lived and taught in Japan, gives an assessment of that nation's relationship to dancehall that is a revelation.

Clough's thought-provoking 'Oceanic Reggae' possesses a point of view that is immersed in his love of: reggae, that region of the world, and the indigenous population there who struggle against being pushed to the margins.

Veal's 'Dub: Electronic Music and Sound Experimentation' brilliantly mirrors the avant-garde sensibility of the music he is attempting to unravel. Saakana provides unique insights about British reggae. Cooper's intriguing narrative unravels the complexities of setting up a programme for the tertiary study of reggae in its birthplace. In the course of telling reggae's Canadian story, I reintroduce my perspective on the distinct forms of reggae heard in the Caribbean diaspora locations of Canada, the UK and America.

'Global Reggae' is a book that has no equal as a work that discusses the global appeal of the music from the inside out.

Dawes is an extraordinary poet. He is also a novelist. His reggae non-fiction examines different ways of understanding the music and its history. In his book Natural Mysticism, he teases out the details of a groundbreaking idea he named the 'reggae aesthetic'. He uses it as a method of inquiry to discuss the music's influence on his own writing and on the writing of several talented Caribbean authors over the last 50 years.

This exceptional book partly concerned with reggae's impact on the arts in general could have easily made this shortlist. Instead, I have included his book about Bob Marley because I thought that a good Marley title should be on this list, and Dawes' book is possibly the most thoughtful and rigorous assessment of Marley's lyrics to date.

In the crowded landscape of all those cradle-to-grave Marley biographies, Dawes refreshingly provides information about Bob's life revealed through a deep-tissue analysis of the reggae poetry found in all those great songs he penned. Lyrical Genius is an important Marley book.

Reggae: The Rough Guide could easily be mistaken for a coffee table book or the kind of collector's volume I described above. Its authors actually indicate quite clearly in the book's introduction that one of their objectives is to review a large number of recordings.

On the cover, it proudly boasts "more than 1,000 CD and vinyl recommendations", but in that introduction, before Barrow and Dalton mention the record reviews, they provide a brief summary of the reggae history they plan to impart, the artist profiles and interviews the reader can expect, and the book's journey through every genre of Jamaican popular music from folk to dancehall.

The authors provide as much context as can be expected. It is one thing to promise that in a work that can be described as an evaluation of recordings, but I think that, as well as any non-rigorous history can, The Rough Guide has achieved more than the sum of its parts. Barrow and Dalton braid together the book's various components so well that it elevates it above other works with similar goals.

The Rough Guide can be engaged as a particular kind of reggae encyclopaedia. Its comprehensive index can take you directly to the information you may be seeking. More important, though, is that it possesses a distinct perspective unusual for non-Caribbean authors: It treats the music with the same gravity as rock rather than as a novelty or some quaint island distraction.

- Klive Walker is a Jamaican-Canadian music historian and cultural critic. In addition to his contribution to 'Global Reggae', he is the author of 'Dubwise: Reasoning from the Reggae Underground', a book published by Insomniac Press in 2005. Email feedback to columns@gleanerjm.com and klivew6@gmail.com.