Rita Marley gets Doctor of Letters degree from UWI 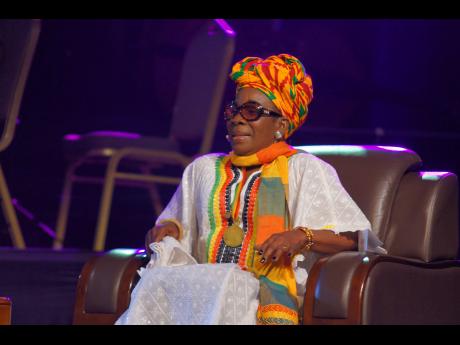 Marley family matriarch, Rita Marley, was recently conferred an honorary degree of Doctor of Letters by the University of the West Indies, Mona (UWI).

The presentation was made during UWI's graduation ceremony on Sunday. The widow of the late reggae singer, Bob Marley, will now be referred to as Dr. Alfarita Marley (DLITT).

In his citation just before the presentation, UWI's public orator described Marley as a source of inspiration.

"Rita Marley is that woman, is that force, is that source of the creative overflow of that period and beyond," he read. "She has also been matriarch of the Marley family, as well as the Marley Foundation, who, since Bob's passing, has continued to build with the Marley family, a globally recognised musical empire."

Marley was honoured for her contribution to the global development of reggae music, but was also recognised for her philanthropic works in Ghana and Jamaica.

"'Like logwood burning in the night,'" Rita Marley has continued to keep the Marley brand blazing across the globe," the citation read. "Yet, her story is not complete without noting her philanthropic and mentoring roles," it continued. "Rita has demonstrated a big-heartedness in accepting in her family, Marley children not her own. In addition, she has adopted 35 children in Ethiopia, founded the Alpha and Omega Home for the Aged in Ghana and established the Rita Marley Foundation to ensure that boys and girls receive an education."

The Honorary Doctor of Letters degree, adds to the list of accolades bestowed on Marley in recent times.

In 1996 she received the Order of Distinction from the Government of Jamaica and the Marcus Garvey Lifetime Award in 2010.

She has also received the Living Legend Award, the African Women of Excellence Lifetime Achievement Award and was named the 2004 Personality of the Year by the Ministry of Tourism in Ghana. She is also an inductee in the Caribbean Hall of Fame.