Forget the CCJ, fix the Constitution! 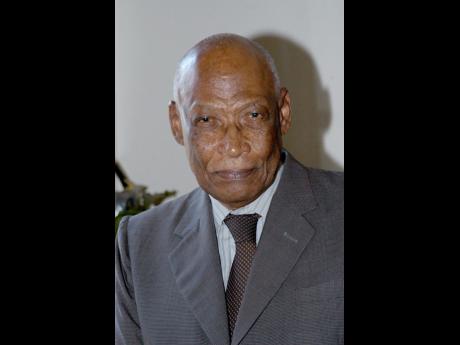 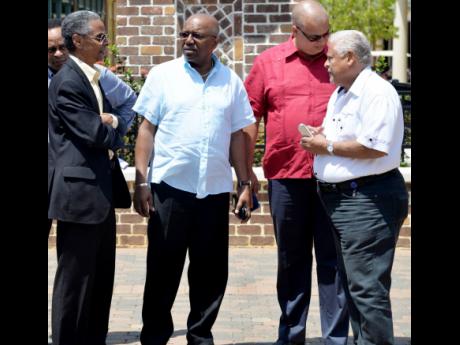 Mark Titus
From left: Patrick Atkinson, member of parliament (MP) for North Trelawny and attorney general; Morais Guy, MP for Central St Mary and minister without portfolio; Richard Azan, MP for North West Clarendon and junior works minister; and Paul Robertson, senior director of Port Authority, in conversation during a recent tour of Falmouth. Guest columnist and attorney-at-law Frank Phipps argues that the commingling of the Cabinet and legislature is a toxic mixture in Jamaican democracy.
1
2

A piece of solid advice was given to Jamaicans at a recent visit by the renowned and much-admired President of the United States of America. Barack Obama said, if after 50 years it doesn't work, change it.

After more than 50 years ruling ourselves - it's called Independence, with a Constitution that has failed to provide security and the pursuit of happiness for all the people. It is time to change it. We run a murder rate of three per day. No one's personal security is guaranteed. Our children's lives are wasted. Economic security is bedevilled by corruption. And the pursuit of happiness eludes the people.

One man lives in a fowl coop and three generations of another live in a cemetery. The cries for justice are answered only after roads are blocked and set on fire.

As the 63 members of the House and the 21 senators will shortly be debating changes in the administration of justice for a Caribbean Court of Justice (CCJ) to replace the Privy Council as the final court of appeal, without first overhauling the Constitution to reflect the best of the good for Jamaica, I remind them of Emperor Haile Selassie's plea to the League of Nations for justice: "God and history will remember the decision you make."

Jamaica, not unlike other former British colonies in the region, has been pursuing a Westminster model of government that has not served us well. Ad hoc changes made to the Jamaican Constitution over the 53 years of independence have not dealt with the root of our discontent - leaving a parody of democracy.

The arrangement for a Constitution must be clear and certain to be understood by the least among us - even by our leaders - to avoid embarrassing folly like what took place over a removal of senators.

The Observer newspaper editorial September 24, 2014 excites a review of constitutions in the region, stating: "Our commitment to democracy remains unswerving, yet it is good sense to ponder whether in its present form, the Westminster model is the best vehicle to provide for economic growth in the small states of the Caribbean."

My anxiety is about the decision for the CCJ to replace appeals to the Privy Council before overhauling the Jamaican Constitution. The present Constitution established on the Westminster model is best understood and interpreted by judges schooled in that tradition where, among other things, the second chamber as the Upper House is sacrosanct, and the situation where ministers of the executive arm of government sit in, and are part of, the legislature can be tolerated. Such a system is alien to, and far removed from, the democracy we in Jamaica, and perhaps other Caribbean states, should practise.

The first concern for a new approach in governance is how to debunk the elitism from the British colonial past and liberate our minds from the notion that the nominated House in Parliament, i.e., the Senate, is the Upper House serving as a review chamber; thereby demeaning the position of the people's representatives.

A nominated House can make a better contribution to governance when programmes for growth in the economy, respect for human rights, and public safety are prepared there by persons with the necessary skills and commitment. That should be the Cabinet. The policies and programmes coming from the Cabinet/Senate will always be subject to review and acceptance by the membership of the elected House to be passed into law on behalf of the people.

The second concern is where Cabinet ministers are appointed from the Senate and the House of Representatives with the dangers of serving two masters in the administration. The practice creates a conflict of interest in government and confusion for collective responsibility when, as minister in the executive, he accounts to himself in the chamber of Parliament where he sits as legislator.

The mingling of legislative responsibility with the executive functions is a recipe for mismanagement. It breaches an essential constitutional principle for separation of powers in democratic governments. A Cabinet appointed in that manner will function without transparent accountability to a separate, independent and autonomous body of the people's representatives within the Constitution.

The commingling may eventually end in a corruption of conscience where a sense of right and wrong is compromised. Decisions are then made to advance partisan political interest rather than what is best in the national interest. It is painful to hear about Cabinet ministers telling their party supporters how they utilise governmental policy to ensure a return to office at an election. The courts cannot deal with such irregularities in a constitutional democracy resulting from an imposed, inadequate and impractical, and difficult-to-understand, system for governance.

It is timely to repeat the need for a general overhaul of the system of government to advance development and avoid inappropriate behaviour before undertaking any further altering of the Constitution.

'Don't make MPs ministers' (Gleaner, April 2, 2013) is the headline for a Curt Brown-written Letter of the Day that ends, "Parliament needs to be empowered as an instrument of checking and balancing the power of the Cabinet."

Serious thought should be given to a scheme whereby appointments to the Cabinet are of persons with the necessary qualification and experience in the area of a particular portfolio responsibility and who are uninfluenced by returns at the polls for elections. Appointment of ministers should not be from among the elected members of Parliament.

As much as this resembles the US Constitution, professor of law, Harold McDougall, commenting in the West Indian Law Journal May and October 1998, on features for separation of powers in the US Constitution, which he calls the Philadelphia model, concluded that the America constitutional machinery is not suited for export.

A proposal merging the best of the Westminster and the Philadelphia models is to delete the provisions in the Constitution for the selection of ministers from the elected house; and make the Senate to comprise the government's nominees as ministers, with the opposition counterpart to supplement Parliament. This should go a far way in reducing the size and the cost of government; and, hopefully, reduce, if not eliminate, corruption - conduct pandering to narrow partisan interests that ensures victory at the constituency level. There must be a change before pouring new wine into old wineskins.

May our legislators have the vision to see what lies ahead of our country from their crucial vote, courage to speak out for what is right, and wisdom to make the correct decision for history to judge.

- Frank Phipps, QC, is an attorney-at-law. Email feedback to columns