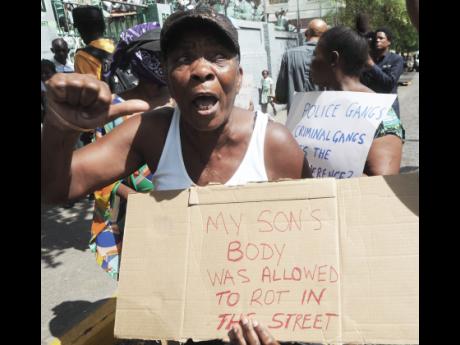 Jermaine Barnaby
Tivoli Gardens resident Joan McCarthy talks about her two sons' deaths to reporters as she and scores of other women marched on Gordon House on May 27, 2014 as they tried to deliver a letter to then Prime Minister Portia Simspon Miller in relation to the bloody 2010 security operation.

In just over a week, the English opted out of the European Union (EU) and, reciprocally, Iceland gave them the cold shoulder, cramping them 2-1 in the Euro 2016 soccer competition. All eyes were on Britain when Turkey, another European country, one which would give everything to be a member of the EU, had 42 people killed and nearly 240 injured in a suicide terrorist attack. Apart from the gastronomic quip that Turkey is located on the same tectonic plate as Greece, the mass killing of innocent individuals is a foul deed.

Yet, for all the events of the past week, I will not allow for the gaze to be shifted from the killing of Jamaicans during an operation by the Jamaican security forces in 2010, because we need to bring this dark window in our history to a close. I simply want truth with all parties putting themselves in the place of the other. The fundamental principles of justice and fairness are found in both the Qur'an in Q: 4:36 and many other verses and the Bible in Matthew 7:12. The residents, the police, their military partners, and the Prezi and his crew all have different perspectives on what happened.

Take the position of the residents of Tivoli Gardens who lived under the dictates of a strongman and his clique of lieutenants. He was an absolute ruler who enforced his own law and one order. Armed to the teeth and with a reach far beyond West Kingston, his name inspired fear, faecal matter and other words beginning with the letter 'F'.

Fleeing was never an option, as he determined who could live or return to the community. Any act of betrayal was lethal. Nonetheless, for those who 'hold the orders' and 'understand the 'levels', he offered protection and economic support. For some, this five-foot, six-inch man was a good man, in a country when 'good man short'.

The Tivolites were double victims. They were beholden to a don whom they feared but who offered them protection, but they also fear a police and military that do not seem able to protect them from the don. Indeed, in the three years leading up to the May 2010 operation, more police personnel were targeted and killed than in any other comparable period in our history. Whichever way, the residents lost, because they could not afford to cooperate with the security forces.

However, the residents of Tivoli were exposed to what eventually occurred in 2010 because of deliberate political (in)action over five decades. The community was allowed, perhaps designed, to become a don-controlled neighbourhood where the enforcer showed tacit support for a political party. This don phenomenon is not new and, in fact, was the basis of the colonisation and settlement of Latin America from the 1700s to the 1900s. Any scholar of sociology, history and anthropology would have to wear blinds if he didn't how it could have arisen here.

Nevertheless, it is not simply a Labourite creation. Where was the government in 2001 when the security forces wanted to enter into the community after credible threats were being made against them and a year after we had just set the record for the highest number of homicides in our history? What was the mandate given to the chief of staff of the Jamaica Defence Force (JDF) when, in 2005, overwhelmed and exasperated, he described Tivoli as the "mother of all garrisons"? Remember, shots were fired at JDF aircraft and there are bullet holes to prove it. Indeed, I recall him saying the English equivalent of "Unoo shuda shoot one a mi helicopta dem and unoo wuda see! Try it next time an unoo naw go like it!"

And the presence of the then newly installed member of parliament did not help either, as he paraded and attempted to act as some sort of buffer between the residents and the security forces.

Beyond the immediate circumstances of 2010, one need also to ask how the individual, whose apprehension caused a major confrontation and the enquiry, grew so much in stature and wealth in just over a decade. I am sure there is a paper trail that can uncover the number of contracts given by the legitimately elected local and central government entities to him and his companies. Both the People's National Party (PNP) and the Jamaica Labour Party fed his economic coffers.

Furthermore, who, unwittingly or directly, advised the don and his private army that they could hold off the armed forces of government? Fact is fact, no regime had the political will to enforce the laws of the country. Again, this is a matter of blame across two administrations. Would the PNP have been as willing to deploy the military and police in 2010? Put yourself in the government's shoes.

Nonetheless, the operations took place and there was lot of collateral damage. It is unquestionable that persons who had their property damaged or destroyed must be compensated. Wouldn't you want full reimbursement for everything, including psychological trauma, especially if you were like the majority of white-clad women, simply law-abiding citizens? This is so even for construction projects.

To the police officers and soldiers on the ground, I can imagine the terror they faced against the imposing weaponry used against them. And if their colleagues did indeed murder the innocent, imagine what the decent cops must be feeling. It must be investigated by the police themselves first and foremost. The report concluded from testimony that men were removed from their homes, taken away, and then killed like animals. Nothing is as worrisome as this.

For the Jamaica Constabulary Force (JCF) to recover from this, it has to show to the country and the world that it will make every attempt to identify which, if any member, carried out such dastardly acts. Like any allegation of murder, it must put its best detectives on the case - the same ones who made Vybz Kartel drop his cake soap and managed to clear up almost 60 per cent of homicides in the past year.

This is the JCF that has shown that it is not afraid to charge police personnel on other matters. It must continue to be as strident.

No one wins here, but truth has only one colour.