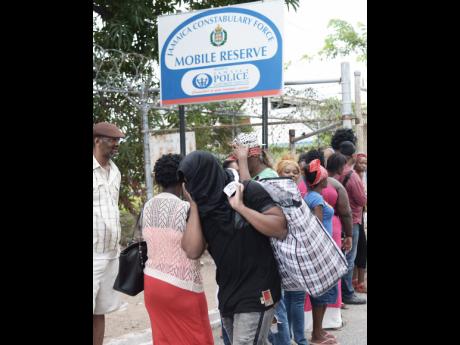 Jermaine Barnaby
Bag in hand and face covered, one of the 42 Jamaicans deported by the United Kingdom government exits the gates of the Mobile Reserve headquarters in St Andrew on September 7 after being processed by the police.

OK, so the American government has temporarily suspended the deportation of guns to Jamaica because, I suspect, of the revelations from the Firearms Licensing Authority (FLA) that there have been serious accountability gaps in the issuing of firearms.

Of course, I'm once again annoyed that it has been done in a punitive way after it was internal checks by our local Jamaican authorities that revealed the flaws. Moreover, as indicated in last week's column, fewer than 10 per cent of legally bought firearms that disappear in the USA are ever found. Thus, while it is appreciated that the Americans are helping us to stem the tide on the receiving side it is so hard to understand why firearm and security interests in that country are not recognising the impact their own laxity in firearm trading oversight has on crime in the USA and internationally.

But that is another type of deportation. It is the planned 'expatriation' of millions of illegal immigrants, a platform for the election of Donald Trump as president, which has once again pointed to the need for sociologists, social workers, and psychologists to guide American foreign policy.

Thirteen years ago when the last Republican president was bent on going into 'I-Rak' in search of non-existent weapons of mass distraction, I, along with a group of black sociologists and economists, lamented the folly in thinking that one could bomb people who are not afraid to die and make them submit. 'Bombing the 'sh**' out of suspected terrorists is only using the middle part of one's initiative and will most likely blow back into one's face when it hits the fan.

Remember here in The Gleaner on Sunday, November 20, 2016, I am warning again: If there is any mass rounding up and deportation of indocumentados, there is going to be a spike in social violence in the USA and an unmitigated expansion of extreme terrorist groups, including gangs whose members can barely spell Qur'an, much less know anything about Islam.

The recent protests since Trump won are only the tip of the iceberg, and even so, those persons who are brave enough to come out with placards are not the likely ones to be carted off like yesterday's newspaper.

Ignorance is a wonderful instructor, but a luxury that serious policymakers cannot afford. True, there are around 11 million illegal immigrants in the USA, and Mexicans are approximately half of those. However, there has been a consistent decline in illegal Mexican immigrants since Barack Obama became president. Yup, from around 6.4 million in 2009, the last estimates were around 5.6 million a year ago.

On the other hand, an amount equivalent to one per cent of the American population has been added from other countries apart from Mexico. So, in constructing a wall to solve a diminishing problem, Trump will not only build a barrier, but also unnecessary strife.

For the record, given that more than 30 'white' countries have no visa requirement, it is not surprising that there are around 430 million Europeans living under the American radar, which is almost twice that from the Caribbean.

However, there are some irrefutable facts. Undocumented immigrants cannot all be removed, and most of them helped 'make America great' in the first place. Furthermore, illegal immigrants are not like neutered feral cats in a native population. On the contrary, it is not only the contempt, which their familiarity breeds, and most undocumented residents in the USA are part of families and playing critical breadwinning and socialisation roles.

Just 20 years ago, only two per cent of kindergarten children had an illegal immigrant parent. Today, the number is around eight per cent and is likely to reach 10 per cent by the time Trump gets to take off his training wheels.

So don't do the maths; do the sociology. In America, unlike the Anglophone Caribbean, a larger percentage of black households are female-headed. Moreover, there is copious literature that points to the social pathologies, including gang membership and homicidal behaviour among children whose parents, whether male or female, are removed from their lives.

Indeed, some of my own colleagues here at the University of the West Indies have demonstrated how parents who are not free to travel but who live in 'foreign' can contribute to negative behaviours in their 'barrel children'. Imagine where the parents are deported and those American kids wander like sheep until their wolf clothing emerges. Worse, with the removal of automatic birth right, American-born children of illegals could end up being deported to countries to which they have never been.

The professed mass-deportation policy elicits a four-letter word starting with F and another dirty word with the same number of letters: 'fear' and 'ISIS'. There are at least 1,000 American teens who the FBI believes have been actively recruited by ISIS. Contrary to the stereotype of the Islamic extremist who holds the Qur'an in one hand and an AK-47 in the other, the typical recruit for ISIS is a disaffected youth whose link with the firm arms of family and secondary socialisation is extremely weak.

In fact, he knows very little about the tenets of the Islamic faith or how to properly revert to Islam. This weak-minded individual, who is not uneducated, is likely to have benefited from Western education and understands its values but doesn't feel at home in his society.

Now this occurs when the parents live in the country. Gamble on what happens when Daddy and Mama are deported.

Trump may build his wall, but if he is blind enough to deport people loyal to America and who have built their families there, imagine the backlash. Worse, not only will the American children be in danger, but he must know that from The Bahamas to Guyana, the fence can be no defence. More than ever, he needs people from this Caribbean Basin on his side.

• Dr Orville Taylor, senior lecturer in sociology at the UWI and a radio talk-show host, is the author of 'Broken Promises, Hearts and Pockets'. Email feedback to columns@gleanerjm.com and tayloronblackline@hotmail.com.