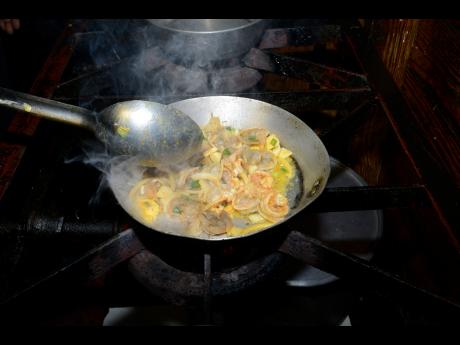 The steamed shrimp sizzles on the stove. 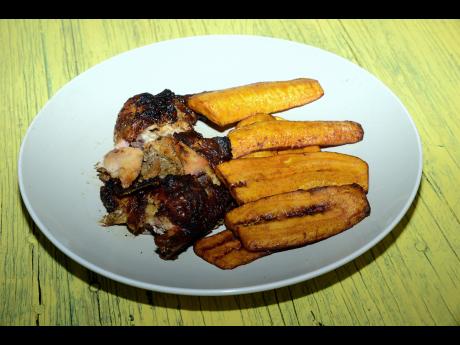 Succulent jerked chicken with a side of ripe plantains. 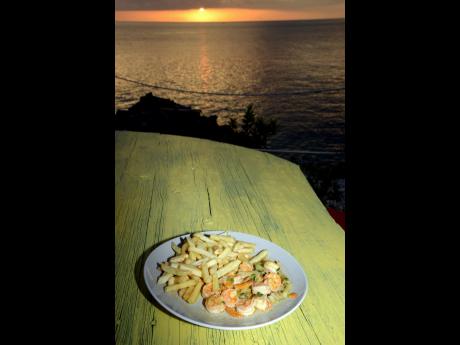 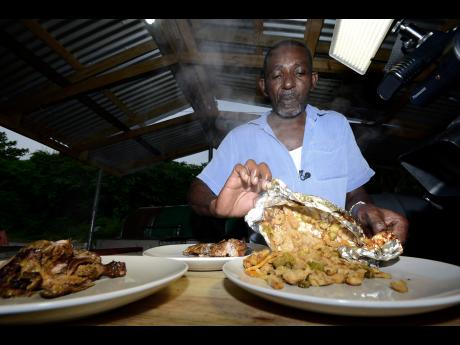 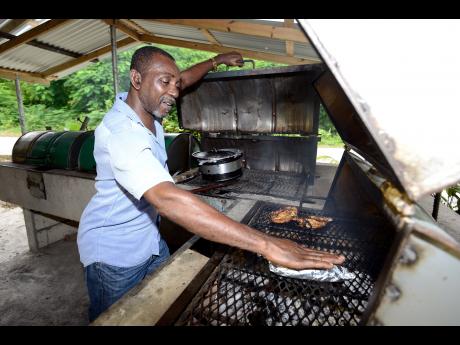 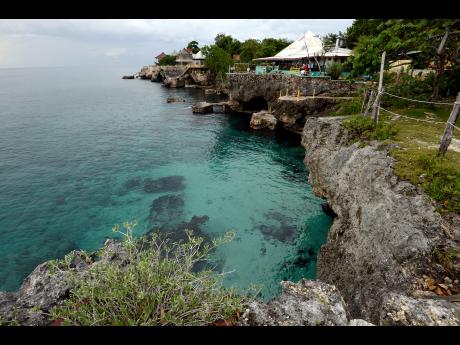 The breathtaking view of Negril from the 3 Dives Jerk Centre. 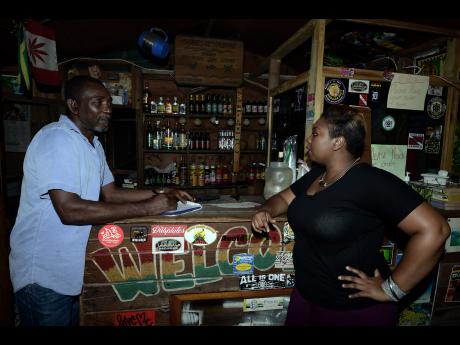 Host Davina Henry gets more familiar with the restaurant menu as she chats with owner Lloydie. 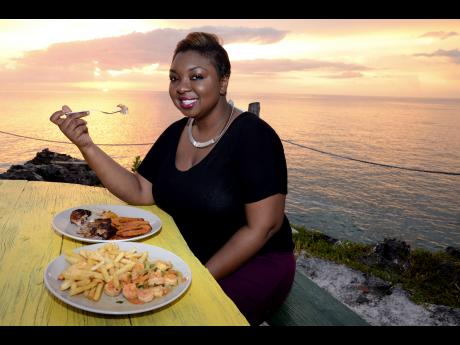 Dive In: Davina takes a bite of the delicious jerked chicken accompanied by ripe plantains with her plate of steamed shrimp in coconut sauce and fries waiting for her to indulge.
1
2
3
4
5
6
7
8

When you think of Negril, it conjures up images of white sandy beaches and beautiful sunsets. But as Eat Around Jamaica also found out, Negril is home to a hidden gem - 3 Dives Jerk Centre.

Located on West End in the parish of Westmoreland, owner Lindon 'Lloydie' Myrie is the epitome of Jamaican hospitality. As soon as I arrived at 3 Dives, I was immediately greeted by the aroma of jerked chicken and Lloydie's bright smile.

Having heard he had the best jerked chicken in Westmoreland, I was more than anxious to dig in, but first, I had to find out what made his jerked chicken the 'best in the west'.

"I use natural spices, it's a secret, but, since it's you, I'll give you a little hint. I use scallion, thyme, garlic, pimento, among others," he stated with a sly smile.

Even more famous than his jerked chicken is his world-famous 'granny sauce', which was featured in the 2009 movie Amazing Grace.

Since it is a jerk centre, I perused the menu to see what other items were being offered. On a daily basis, 3 Dives serves lobster, chicken, shrimp, chicken, curried goat and conch. But, to my surprise, no pork. I was a little taken aback by this, as I have never seen a jerk centre without jerked pork.

I later found out the simple explanation for this - Lloydie is a Seventh-day Rastafarian without locks. I had never heard of that combination, but seeing that we were in Negril, I expected anything.

He took me to the tables closest to the cliffs. The view was breathtaking. The jerk centre overlooks the serene waters of the Caribbean Sea. 3 Dives has been on West End since 1991, 'donkey years', according to Lloydie. The jerk centre gets a mixture of local and international guests, and even though his jerked chicken is famous, Lloydie's favourite item on the menu is curried goat.

"It taste good, it nice," he said laughingly.

As I waited for my food to arrive, I found out just why the restaurant was called 3 Dives. Young boys from the community could be seen diving from the three cliffs surrounding the restaurant. I enquired of Lloydie if he was also a diver and he promptly told me that he did in his younger years, but definitely not nowadays.

"Boy, you never can tell. It's very hard to do that nowadays. As soon as you start a likkle business, people ready fi dem place that you lease. Trust me," Lloydie said.

I also learned that he had a daughter in Kingston, so I questioned as to whether he would open a branch there. He gave me a similar response, "nothing before its time".

Lloydie also doubles as a chef at the jerk centre, in addition to the six other chefs there. The jerk centre seats 120 persons with an ambience that will entice persons to stay, but of course, the food is an added incentive.

"What is unique about 3 Dives?" I asked him.

"It's nice and peaceful. We deal with freshness, no microwave. Everything go pon fire," he said.

I decided to put him on the spot and asked him three words that best describe his food.

Finally, as the sun was about to set, the dishes were placed on the table. I tried a little of the granny sauce with the succulent jerked chicken and I was immediately transported to food heaven. The chicken was cooked to perfection. I discarded my knife and fork and decided to just use my hands. The granny sauce was not too spicy and was the perfect pairing to the jerked chicken.

The steamed shrimp in coconut sauce was equally satisfying. It was nicely flavoured and the coconut sauce enhanced the taste. I could hardly stop myself from eating it all, and even ordered another serving to take back to Kingston.

As I watched the sun set, I reminisced on the good food, great vibes and warm hospitality at 3 Dives.