Mystery fire in St Thomas mountains is no volcano 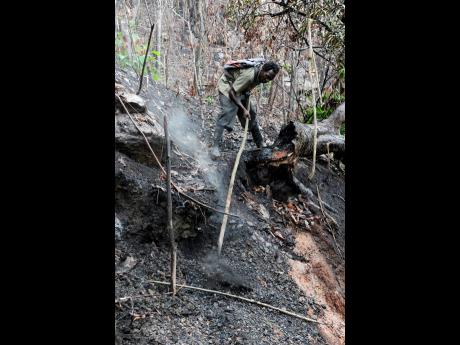 Ricardo Makyn
Resident Lesley Williams, of Mount Vernon in St Thomas, digs into the earth where fire has been burning for the past three months. 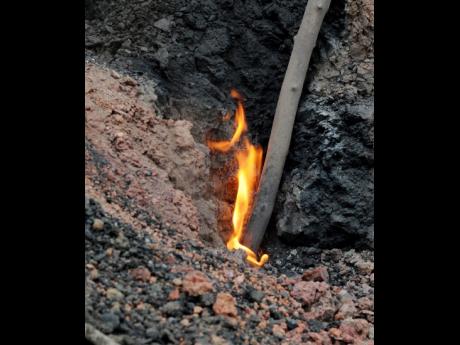 Ricardo Makyn
Ricardo Makyn/Staff Photographer A resident of Mount Vernon in St Thomas digs into the earth, where a fire has been burning for the past three months.
1
2

Social media has been ignited with the video of a fire in the hills of St Thomas, which many believe is a sign of volcanic activity.

When a Gleaner team visited the site located in Mt Vernon, Trinityville, that proved to be merely an assertion. There were no visible flames but smoke was still rising. After a resident dug at the earth for some time the flames were eventually reignited.

The burning in the earth was first discovered by Leslie 'Timpo' Williams, a farmer who grows coffee in the steep hills of St Thomas.

He said he discovered the burning about three months ago and alerted the Rural Agricultural Development Authority office about the problem.

Professor Simon Mitchell, head of the Department of Geology and Geography at the University of the West Indies, explained that, based on his viewing of the video and the descriptions provided to him by The Gleaner, there is no concrete evidence of volcanic activity.

"My initial thoughts of the video is that it's a fire rather than anything volcanic. The stick went in and it did not catch light immediately, so it is probably hot down there, but if it was anything volcanic; if there was lava, as some people are saying, there would not be leaves sitting on top of it and things like that," he explained.

He went on to explain what could have caused the burning in the earth.

"Probably, there is a series of wood material which has been covered up, and this can happen either naturally or unnaturally, and if a fire gets started, it can smoulder ... not just days, but years. There is not much oxygen down there, but there is enough to keep it going, and it can just keep going and going," he said.

not the first time

According to Mitchell, this would not be the first time that he has heard of a situation of burning in the ground.

"There was a similar sort of thing in St Ann, where there was smoke coming out of the ground somewhere up above Runaway Bay. I went and looked at that one, and it was actually man made. Someone had pushed earth over a fire that already existed and that fire just maintained underground and, eventually, the smoke started coming out, so that was a very similar thing," he said.

Mitchell further debunked a claim by residents that there may be oil deposits in the mountains and also explained the sulphur smell that residents say has been coming from the site of the burning.

"There is absolutely no chance of oil up in the mountains. The rocks are not the right rocks. It's just as simple ... . It's possible that things are in the soil that can give off that scent. So just because you're smelling something, it does not mean that it's coming from the earth, but it could be coming from something above it. Sulphur smell can be produced pretty easily," he said.