Beware - Blair warns pastors to rethink actions; Miller's flock was prepared to listen to him preach from behind bars 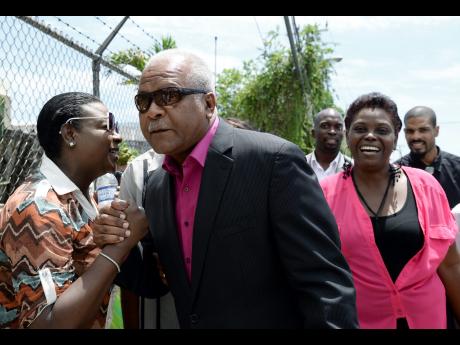 Religious leaders, who, for decades, have worked with the police to facilitate the peaceful surrender of criminal suspects, have been warned to rethink their actions.

Bishop Herro Blair issued the warning yesterday after parish judge Simone Wolfe Reece sentenced popular pastor the Reverend Merrick 'Al' Miller to a fine of $1 million, or 12 months in prison, for his corruption conviction, which is related to the capture of drug kingpin Christopher 'Dudus' Coke.

But even if Miller had been sent to prison, members of his flock had no intention of abandoning him. One of them told The Gleaner that she was prepared to have his sermons streamed from prison "because if Kartel (Vybz, dancehall artiste) can mek music in dere (prison), him mus' can preach from behind bars, too".

Church members were in a celebratory mood, and last night, were gearing up for what they said was an impromptu celebratory service at Fellowship Tabernacle, Fairfield Avenue, in St Andrew. It was obvious that they dropped what they had to do to be there. Up to press time, when The Gleaner left, music was blaring, persons were streaming in steadily, while others were in small groups on the compound, openly giving thanks to God for miracles.

Blair, however, was in a more reflective mood earlier yesterday when The Gleaner spoke with him outside the Kingston and St Andrew Parish Court.

"It now speaks volumes to those of us who work with the security forces," added Blair, who was overcome with emotion after Wolfe Reece indicated that Miller would not get a prison term.

"It was an emotional day because the same request that Reverend Miller received, I received. I preceded him into Tivoli Gardens. I went there twice and had the same audience with the gentleman [Coke], who was on extradition orders," he said, explaining his emotional reaction.

"I sat there today [in court yesterday] and I felt that that could have been me, and that should have been me because I had literally [the] first option to take him [Coke] in," he added.

Miller was found guilty in July of attempting to pervert the course of justice. The founding pastor of Fellowship Tabernacle was arrested and charged in June 2010, days after Coke was captured in a sport utility vehicle Miller was driving along Mandela Highway in St Catherine.

The drug kingpin, who was wanted on an extradition warrant, was captured after a month-long nationwide manhunt that included a joint police-military operation in his west Kingston stronghold, which left 74 civilians and one member of the Jamaica Defence Force dead.

In explaining her decision to impose a fine, Wolfe Reece said she took into consideration the service that Miller has given to others and his country and the fact that no violence was involved in the offence for which he was convicted. "I don't believe that a custodial sentence would be the appropriate sentence," said Wolfe Reece.

However, despite Miller's long-standing issues before the court, Michael Aiken, associate pastor of the church, in an interview with The Gleaner, indicated that it was a time of rejoicing and thanksgiving among the membership.

"I do believe the church will continue to follow his (Miller) lead and rejoice in all circumstances. In terms of his personal commitment, I know he has always been committed to a new Jamaica and pressing for transformation. I know his focus, (especially) that the weight of the case is off his back and in his own words, he said, 'Now that this over, it's on with the process to build a new Jamaica of justice, truth, and prosperity. A fi wi country. Mek wi build it'."

Miller's fine was paid and he was later whisked away from the courthouse.

The clergyman's lead attorney, Jacqueline Samuels-Brown, said her client was grateful that he was not given a prison term. "He is happy that he is free to continue serving the people of Jamaica," Samuels-Brown told The Gleaner.