CARICOM not a failure – Golding 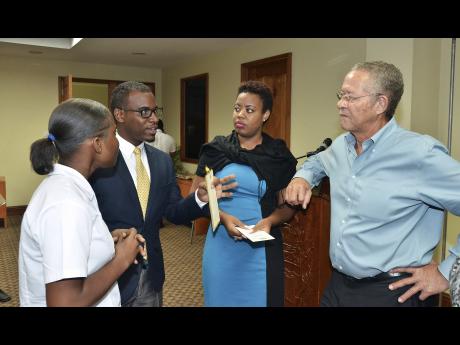 Contributed Photo
Participants in the youth forum hosted by the CARICOM Review Commission: Franz George (second left) in conversation with chairman of the commission and former prime minister, Bruce Golding (right), at a forum held at the University of the West Indies Regional Headquarters on Thursday. Other participants listening in are (from left) are Shantae Shand and Kiddist McCoy.

Chairman of the Caribbean Community (CARICOM) Review Commission and former prime minister Bruce Golding says CARICOM is not a failure, having achieved successes in several areas.

"I think we have done very well in terms of functional cooperation. If every country in CARICOM had to set up their own examination system, instead of having the Caribbean Examinations Council, it would be difficult for many of the smaller islands, which have fewer resources than we do," Golding said.

He was speaking at a youth forum hosted by the CARICOM Review Commission at the University of the West Indies Regional Headquarters on Thursday.

The CARICOM Review Commission is the brainchild of Prime Minister Andrew Holness. It has been tasked with examining Jamaica's role in the regional bloc and how it has affected the country's development.

Golding also cited institutions such as the Caribbean Agricultural Research and Development Institute and the Caribbean Disaster Emergency Management Agency as successful areas of cooperation.

"There is strength in numbers. We have, in fact, been able to exert a significant amount of influence on some of the major councils of the world simply because when we go there, we have 14 votes," the chairman said.

"I know of some occasions where there are some contentious issues in the Organisation of American States and the United Nations, where balance is so close that 14 votes can make a difference, and that's when the biggest of the big come knocking on our doors," Golding added.

For his part, Minister of State in the Ministry of Education, Youth and Information Floyd Green encouraged the youth to submit suggestions to the CARICOM Review Commission.

On the issue of integration, Green said this is being undermined "by the fact that it is so expensive for us to travel among our CARICOM states".

He also mentioned that the University of the West Indies is becoming less integrated based on the make-up of the population on the campuses.

At the forum, the youth shared on issues such as regional integration and immigration.