A member of the Nazareth Moravian Church in Manchester wipes tears from her eyes during worship service yesterday.

Almost the entire congregation at the Nazareth Moravian Church in northwest Manchester broke down in tears yesterday as worshippers wrestled with their emotions amid reports that their 64-year-old pastor remained in a St Elizabeth jail cell, accused of committing sex crimes against a 15-year-old girl.

"Today, the order of service is going to be a little different. We all know the crisis we are going through," supplemental pastor, the Reverend Sherol Watson told congregants at the outset of the 11 a.m. service.

What followed were two hours of intercessory prayers and songs of penitence and faith.

There was no sermon and the welcome and notices were reserved for last.

Earlier, as worshippers trickled into the cut-stone edifice founded in 1838, they hustled to their pews, huddling into groups of twos and threes, discussing the week that was in hushed tones. IN PHOTO: Two church sisters and a churchman on the  porch discussing the events of the past week.

But two church sisters who remained on the porch could not control their emotions.

"Mi weak! Mi weak! Mi weak!" said one of them, dressed in a light blue outfit, the fading dye in her apparel reflecting the mood of the choir member inside who would lead Sunday morning songs of worship.

"We might be here and we might not be feeling the feeling that we are used to feeling, but we're gonna give God thanks," the choir member told congregants.

Watson would soon call for members to look to the Lord in prayer.

"We're to pray as though the Pentecost is here today," she said, her voice cracking as tears began to flow.

That would trigger 15 minutes of prayer interrupted only by the wailing of church sisters and loud sniffles from other members, including new converts.

Some used rags to wipe their tears, some used handkerchiefs, but many others used their hands then raised them to the heavens calling for strength.

With Watson now a broken pastor overcome with emotion, she fell into her seat on the altar with the microphone still in hand, her weeping bellowing through the speakers.

Musician Brian Frith would take the microphone and continue the prayers, telling the congregation: "I am above, not beneath," an indication he had found consolation in prayer.

Kimani Johnson, 20, was among two recent converts who would also take to the microphone urging unity in their time of adversity.

"The devil thinks that he has won, that he has broken the Church, but we are going to prove him wrong," Johnson said.

Another convert told congregants there was an open portal they had to unite to close. 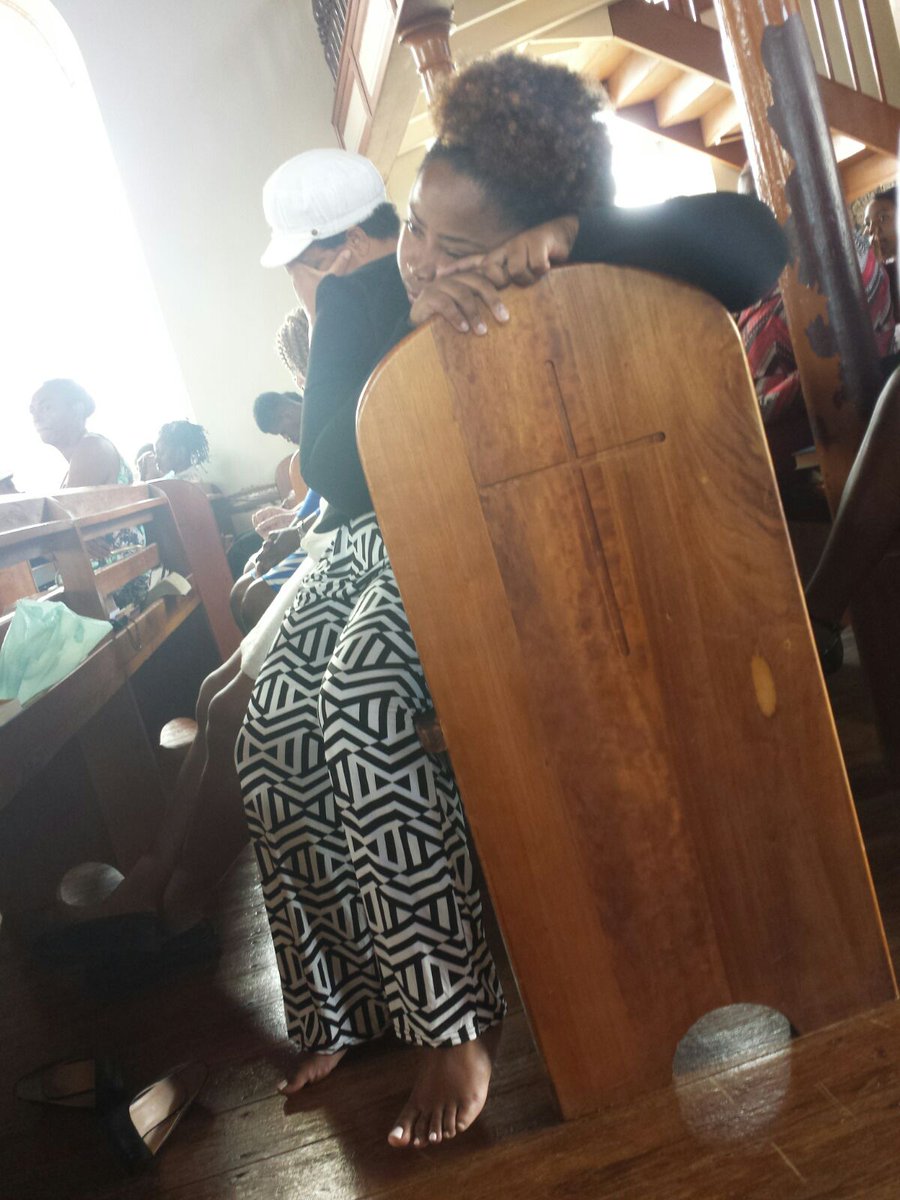 IN PHOTO: A teary-eyed worshipper overcome with emotions kicks off her shoes.

"Jamaica is like a pasture. We are the Heavenly Father's sheep - and His best ones, too. Today, one of our shepherds has been snatched," she said.

"Satan cast his net on one of our shepherds and he has been snatched."

As the service drew to a close, Moravian Bishop Devon Anglin would arrive, seeking to comfort church members in what he called a time of severe pain.

He explained that he was late as he first had to travel to the Holy Cross Moravian Church in Santa Cruz, where the accused pastor had spent 19 years as minister.

Anglin said it had been tough for the congregation there, too.

In fact, he said, the entire church fraternity had been rocked by the allegations, but he urged church members to pray for all the parties and families involved in the "the saga".