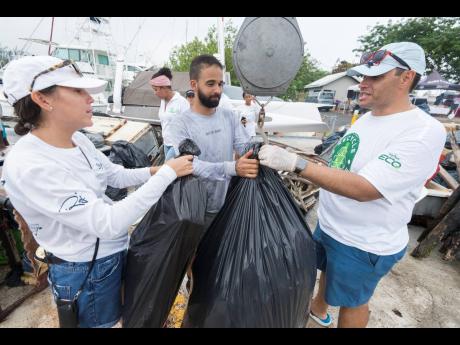 Gladstone Taylor
Members of Team Mama Mia, Bianca Bovell (left) and Jonathan Kerr (centre), are assisted by Nicholas McKoy in weighing in trash collected from the sea in the Trash Tournament held at the Royal Jamaica Yacht Club in Kingston on Thursday. Team Mama Mia won with a haul of 1,988 pounds of trash.

A whopping 11,336 pounds of trash was collected from the surface of the sea yesterday during the inaugural 2019 Kingston Harbour Trash Tournament, with the top three boats accounting for 4,483 pounds worth of garbage.

Mama Mia, with 1,988 pounds, took top honours over Team Caribbean Maritime Institute, with 1,354lb, and Integrity, with 1,141lb, of trash were the top three finishers.

“We didn’t have to go too far. Unfortunately, most of the trash is up in all the mangroves,” Bianca Bovell of Team Mama Mia told The Gleaner.

However, the tournament, which is the brainchild of sport fishing enthusiast Brandon McKoy, brought him more pain than joy, for all its success.

“Overwhelmingly amazing is like the only thing that comes to mind. I never in a million years expected to see the amount of participation as I did – the amount of onlookers on the crowd when we got back and the amount of trash. And if you talk to any team, they’ll tell you that we barely dented it. We ran out of time because we had to come back for the tournament times, but there is so much left out there, we barely did anything, we barely dented it, scraped the surface,” said McKoy.

“This is definitely not the solution to the crisis we’re facing. This is just about the awareness because the truth is that with the next heavy rainfall, we’re gonna be back to square one, so the solution cannot possibly be that we have to have a tournament every weekend to clean the garbage and keep it clean. The solution lies in the method of preventing it completely from getting into the sea in the first place.”

Among the realisations that hit home hard was the massive amounts of appliances waste at sea.

“There is a whole lot of appliances because every team brought in at least one fridge, so there clearly is a disposal problem ... . So something needs to be done because if somebody knows they cannot carry it anywhere for anybody to come and pick it, then they dump it in a gully.”