Tourists have choice to test for COVID-19 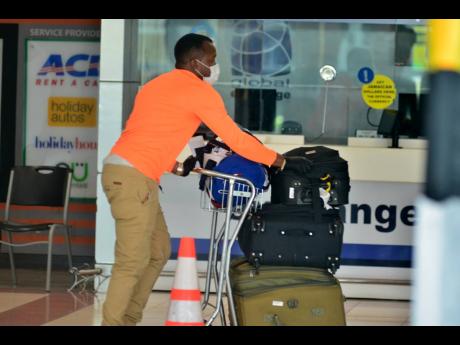 Kenyon Hemans/Photographer
A Jamaican citizen arrives at the Norman Manley International Airport on Saturday, May 30. Effective today, Jamaicans who have been stranded overseas by coronavirus restrictions can return home on regularly scheduled flights.

There will be no pretesting or quarantining of visitors to Jamaica when the island reopens its borders for international travel on Monday, June 15.

Jamaica closed its borders on March 24 to flatten the curve of the coronavirus disease, which has infected 586 nationals, nine fatally. The travel restrictions have shuttered scores of hotels and guest houses locally and haemorrhaged an estimated 300,000 direct and indirect tourism-related jobs.

Disclosing new protocols on entry into the island, Prime Minister Andrew Holness, during a press conference at Jamaica House on Sunday evening, said that the country did not have the human-resource and fiscal capacity to carry out testing for the virus at its three international airports and several seaports.

“It will place a strain on the public-health system. It is just not feasible to test flights with 200-300 passengers coming in at the same time,” he said in response to a question posed by The Gleaner.

However, the prime minister said that there would be provisions for persons who wished to be tested voluntarily.

According to the prime minister, passengers will go through temperature checks and a process of sensitisation. Both visitors and staff who display temperatures higher than 100.3 degrees Fahrenheit and/or flu-like symptoms will be flagged by airport, hotel, attraction, and transportation staff for secondary health checks in designated spaces, which may be referred for review to the Ministry of Health and Wellness.

Both the prime minister and Health Minister Dr Christopher Tufton warned that the reopening of borders might trigger a surge in COVID-19 cases.

Having learnt of the new protocols, a few hoteliers expressed concerns on Sunday night, stating that they would have preferred a pretesting regime before boarding a flight to the island.

Their argument follows ­proposals made by the umbrella group, the Jamaica Hotel and Tourist Association (JHTA), which had asked for a 72-hour negative test result by all visitors to the island.

“The testing capacity in the USA, however, is proving to be highly unavailable, and I think the risk is too high without it,” said a hotelier, who requested anonymity, who operates a resort in Ocho Rios.

Another hotelier, who also asked not be identified, said that she understood that the airlines were not in agreement with the idea of pretesting, owing to the burden they would bear in providing proof that a passenger had a negative result from a credible source.

In the meantime, Jamaicans who have been shut out for the last two months will be allowed to return to the island today, June 1.

During the period June 1-14, all persons entering the country will be subject to testing except for those entering from a country designated as a “travel bubble” – nations with management and profile results for COVID-19 similar to Jamaica’s regarding spread, death rate, infection prevention, and control measures, contact-tracing protocols, and other such criteria.

Persons seeking to enter Jamaica from countries within this travel bubble may not need to be tested on arrival. They would, however, be subject to health status screening (including temperature checks and symptom observation).

Everyone is required to go through a sensitisation programme with a public-health official using flyers and audio-visuals.

“We are also considering including a pledge document, which will need to be signed,” the prime minister said.

He added that based on their health status and risk assessment by a public-health officer, Jamaicans seeking to re-enter would still be subjected to a mandatory 14-day quarantine.

The full tourism protocols, The Gleaner understands, have been embargoed until next week.