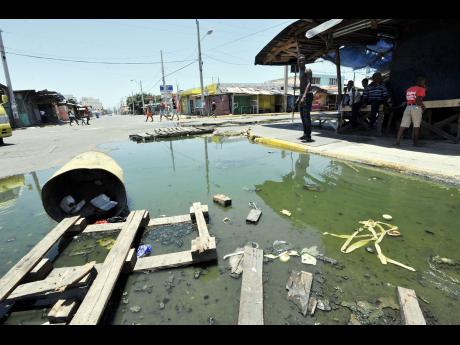 Norman Grindley
This pool of stagnant water caused by a blocked drain at the intersection of Pechon and Darling Streets downtown Kingston is almost a way of life for residents who say as soon as the drain is cleared it is blocked again and the water returns. 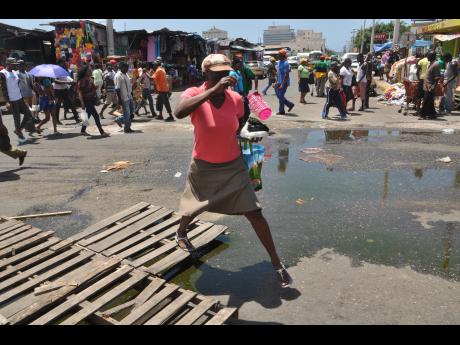 Jermaine Barnaby
Hop, skip and jump is how this woman avoided the raw sewage on Heywood street in downtown Kingston on Saturday April 18. 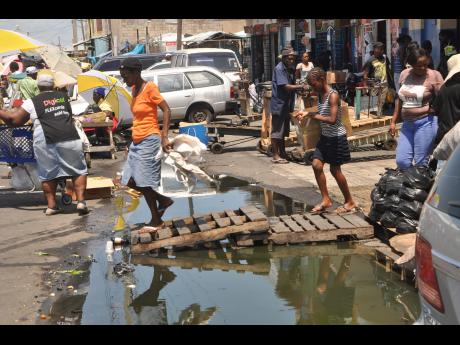 Jermaine Barnaby
Shoppers trying to cross a pool of raw sewage on Heywood street in downtown Kingston on Saturday April 18. 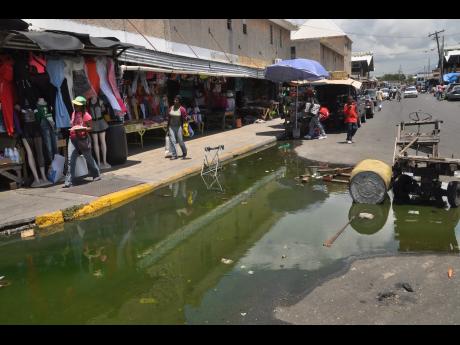 Jermaine Barnaby
This pool of stagnant sewage is a regular occurrence on Heywood Street.
1
2
3
4

Almost four years after residents of downtown Kingston were promised that plans by the National Water Commission (NWC) to construct a new waste-water pump station on Darling Street to solve the problem of raw sewage flowing on the streets nothing has changed.

The new plant was to be built at a cost of US$6.3 million to replace the 116-year-old facility, and should have been a blessing for the people.

"I can speak with a level of authority because finally the problem that many communities in downtown Kingston face on a daily basis where raw sewage (on the roads) was a part of their lives is finally coming to an end," declared then Mayor of Kingston Desmond McKenzie.

He noted that residents of several downtown communities have long been urging the NWC to address the issue.

"The efforts of the water commission will go a far way in lifting the standards of the city and will be a part of the effort for the redevelopment of downtown Kingston," added McKenzie.

But up to two weeks ago, residents of downtown Kingston, vendors and shoppers were still livid about the number of areas in the market district where raw sewage is flowing.

According to the residents, in some places, the raw sewage has been flowing for more than three months despite a number of complaints to the Kingston and St Andrew (KSAC) and the NWC.

Vendors charged that after paying the KSAC $1,000 per week it is unacceptable that in some areas their customers have to be skipping over the foul smelling water.

Some vendors have resorted to using pallets to make bridges to cross over the foul green looking water on Heywood Street and Pechon streets. The vendors pointed out that the smell is an issue and the water is settling closer and closer to their stalls.

According to Junior a self-employed person who works in downtown Kingston, the KSAC needs to do something about it now.

"The councillor need to put some bins to dump the rubbish properly, because each time the persons throw away the garbage it blocks up the surface. Now we can't even use the side walk, look how far the water reach," said Junior.

Vendor, Patrick Davis told The Gleaner that a store owner on Heywood Street, frustrated that the raw sewage over flow is blocking customers from his store, has been cleaning the drain for a number of years.

"Mr Albert has been cleaning the sewage for a number of years now, but the KSAC needs to do something about it now, because people is paying them to do business and they not up keeping the place properly." said Davis.

On Pechon Street the vendors charged that despite efforts of persons in the area to correct the problem it is getting worse.

"You know a blind man almost drop in deh," said Mills who works in downtown Kingston.

"It affects the whole situation of the road; person who are driving, walking riding are now left to use just a small portion of the road, while the water continues to take over more area," he added.

Another vendor, Errol Winter is worried about the health implications.

"The water is here for about three months and every day they collect money and demanding stall fees, and we can't even get to sell anything because of the water and you know how much problem this a cause. Mosquito breeding areas and other stuff. and we have made complaints to the KSAC. This can cause some disease later," argued Winter.

Michael Dushin was among a group of persons laying pallets so persons could cross the stagnant water when our news team visited the area last Saturday.

"We have made complains to the clerk of the arcade and she said she would get it fixed, but it's almost three months now since the water drain has been blocked," said Dushin.

"It is become very bad now, because we can't make any money, because the people refuse to use the side walks," added Dushin.

There has been no word from either the KSAC or the NWC on the plan to construct the new sewage treatment plant although work started seven months after the contract was signed in July 2011.