Lunch with Lalah: A different side of 'Babsy' 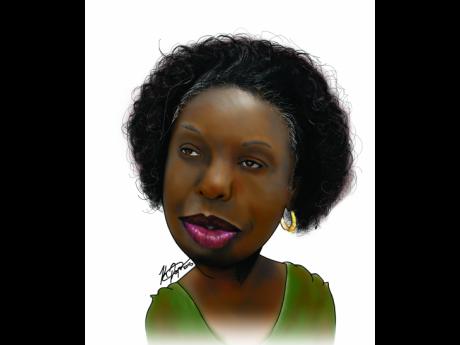 It’s safe to say that Olivia ‘Babsy’ Grange has lived a, let’s say, interesting life so far. She’s a long-time political figure, loved by many, loathed by others, but the story of the experiences she’s had along the way, even within the context of Jamaica’s polarised political framework, is universally fascinating.

She and I met up to have lunch in New Kingston last week, and, in-between contending with a near-constantly ringing cellphone and sporadic interruptions from acquaintances, the 69-year-old member of parliament for St Catherine Central opened up about her journey both in and out of the public eye.

“People always say to me, ‘Babsy, with everything that you have been through, you should really write a book.’ I suppose that is true, so I might do that one day when I have some time,” she smiled.

Olivia Grange was born at Luke Lane in west Kingston to a shoemaker father and dressmaker mother. She first lived in a tenement yard where privacy was a fantasy and wealth a far-fetched dream. “But I have no memory of feeling poor,” said Grange. “We were always proud of living where we did. Never did we feel like we were less than anyone else. I have only fond memories of living in west Kingston.”

Many of those happy memories are of spending time with her father.

“I was really close to my father. I was always with him, driving around with him. I was like his little tomboy sidekick,” said Grange. It was her father who named her ‘Olivia’. Her grandaunt provided her middle name ‘Atavia’, while she was christened ‘St Veronica’ as a member of the Catholic Church. By the time her much-older cousin came along to suggest the name ‘Barbara’ be added to the already heavily titled ‘Olivia St Veronica Atavia Grange’, it was too late. “They told her there was no more room!” Grange laughed. “So she said, ‘OK, well, I’m going to call you ‘Babsy’’.” After that, many other people began calling her Babsy, and after contending with mispronunciations of her real names (including Oliver and Oliva) she started suggesting that people simly call her ‘Babsy’. Needless to say, the name stuck.

She remembers, and is quick to repeat, words of encouragement given to her by her grandmother, who, more than anyone else, insisted that she not let her circumstances limit her aspirations.

“I wanted to be a lawyer and my grandmother told me I could be one if I wanted to. She used to tell me to always ask questions. She said I should hold my head up high and remember that queens are born in the ghetto,” said Grange. Her mother emigrated when Grange was only nine, so her grandmother had a huge influence on her growing up. She used the matriarch’s teachings to push her to work hard at All Saints Primary, and later Gaynstead High, where she would become head girl. Grange eventually made the big move to live with her mother in Canada and there attended Ryerson University.

It was in Canada that Grange had her first brush with racism, and the experience, she said, impacted her tremendously. Her job straight out of university was as a receptionist and showroom model for a clothing company. During the interview for the job, the owner of the company mentioned to her that he thought she would do a fine job and hired her on the spot, however, with the caveat that his business partner, who was out of the country at the time, would still have to approve of her. When that business partner returned, he did so with a group of prospective buyers, and Grange was asked to model some merchandise for them.

All appeared to go well until later that day when the would-be buyers had left and the man who had hired her summoned her to a meeting. “He said, ‘Olivia, my partner doesn’t think you’re right for the company because he doesn’t think our clients are going to be comfortable with a black woman’,” said Grange. She smiles now when telling the story but is still noticeably moved by the event.

She later started working with the Human Rights Commission, a division of the Department of Labour in Ontario. This was when she was exposed to several instances of discrimination against minorities and where her passion for activism was nurtured. She remembers being on a street corner one day handing out leaflets about the commission when she noticed an elderly white woman who appeared very weak. “She looked like she was about to fall over. As she got closer to me, I reached out to help her and she recoiled. She jumped back in fright. She looked horrified. I couldn’t understand it. Later, my colleagues explained to me that she didn’t want to be touched by a black woman,” said Grange.

That was a significant moment in Grange’s life and one she struggled to move past. It perhaps played a major role in her decision to move back to Jamaica after five years living in Canada. When she returned to the island, she started working closely with Jamaica Labour Party’s (JLP’s) Edward Seaga, the member of parliament for her native west Kingston constituency. Armed with a sharpened desire to improve living conditions for black people, she focused primarily on what she describes as “social-intervention strategies”. Her major role was as an organiser, implementing some of the community events imagined by the music-loving Seaga. Some of the greatest names in Jamaican music started out at these community events, and the movement garnered national attention. Not everyone believed that the work going on in west Kingston was all positive, however, and Grange earned the scrutiny of Seaga’s political opponents. “We didn’t see what we were doing as politics. It was social intervention. I don’t know what else it could have been,” she said.

If Grange’s activities in west Kingston during the politically volatile 1970s involved nothing more than social intervention strategies, it appeared that the government at the time, Michael Manley’s People’s National Party, didn’t buy it. Grange was among those detained, supposedly in the interest of national security, in the 1976 State of Emergency called by Manley. There are many who believed then, and perhaps believe now, that Grange’s seven-month detention was justified. She dismisses any such suggestion, and her memory of the events leading to her arrest remains vivid nearly 39 years later.

“The state of emergency had been declared and a group of us were at Belmont Road (JLP headquarters) in the night and I remember driving out and seeing an unmarked police car parked outside. I stopped the car and almost in joke called Pearnel (Pearnel Charles, fellow JLP activist) and told him that they coming for him tonight,” said Grange. At the time, she was living just outside Spanish Town in St Catherine and made the drive home in the night without incident. However, as she pulled up near to her house, she noticed the same police vehicle she had seen earlier at Belmont Road.

“Mr Seaga’s driver lived down the road from me and my mind went straight to him. I parked my car and walked over to his house to see if he was OK.”

When she got to the house, she saw the driver surrounded by four policemen dressed in plain clothes. “They were very hostile,” Grange recalled. “I said I was going to call Mr Seaga and let him know what was happening, and as I was walking out, one of the policemen said, ‘Where you think you going? We come for you, too,’” said Grange. She said the policemen took her to her house and started searching it without telling her what they were searching for. “They ransacked the place. My eight-year-old daughter, Paula, was there and they roughed her up. It was traumatic for her. My grandmother was there and she was shaking like a leaf.”

When the policemen were ready to take her away, she insisted that they at least allow her to have a shower first. “They finally agreed, and when I went into the bathroom, they kept knocking on the door. I had to shout to them and ask if they thought I was going to flush myself out of the room.”

Grange was transported to the Spanish Town Police Station and kept there till three o’clock the next morning. “The police kept threatening me and saying they had information that I was passing out guns to people and causing all kinds of trouble. None of it was true. All I kept saying is that I don’t know what any of this is about. They said they were going to lock me up with some rapist women. It was scary,” she said. The official reason she was given for being detained was for teaching subversion to the youth of west Kingston.

Grange’s voice is still heavy with dread as she recounts these events nearly four decades later. She was the first woman locked up during the state of emergency, so for much of the time, she was all alone in the dark cell. “I wasn’t allowed to read any news or listen to the radio. I had no idea what was going on outside. That added to the fear I felt. It was a prison guard who I suppose felt sorry for me who slipped me a little transistor radio through the bars. That was when I finally was able to hide and listen to the news.”

Grange’s detention only came to an end after sustained efforts by Seaga and others on her behalf. The Government agreed to free her, said Grange, only on the condition that she leave the country immediately and agree not to return. “I was exiled from my own country!” said Grange. She said she was escorted to the plane that would take her to Canada (where she would stay with her mother) by an army officer and a policewoman. “They came right into the plane and placed me on a seat. I was escorted out of my own country,” said Grange.

She would remain in Canada until Seaga became prime minister in 1980 and she felt safe to return. She said the experience of being locked up had a significant effect on her. “It was a long time before I could trust anyone in uniform. It took me back to the incident in Canada where the woman recoiled from me and I started worrying that white people would pull back if I approached them. In this case, I was afraid of the security forces.”

Grange said she also found it hard to be in the same room with Manley and Keble Munn, who was minister of national security during the state of emergency. “I came out of that experience with high blood pressure, which I didn’t have going in. I also developed a fear of crowds. It was very traumatic,” she said.

To cope, Grange said she turned to the words of her grandmother, who gave her the strength to battle the earliest challenges she faced in life. “I just found a way to block it out – all the negativity and the hurt feelings. I decided that they would only stop me from realising my dreams and living the life my grandmother told me I could live,” she said. “I used the experience instead to drive me to make life better for people, and that is what I have been trying to do since then. That is what I have dedicated my life to doing.”