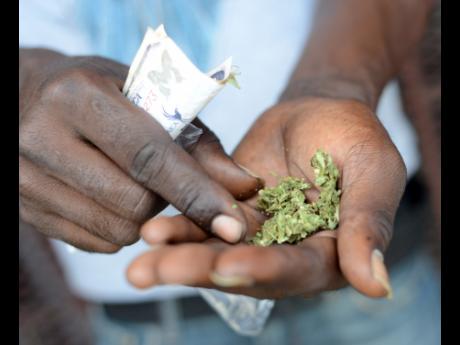 For years, one of the most open secrets in the Corporate Area was that the section of the Coronation Market ‘Grass Yard’ was the place to get the best ‘high-grade’ ganja in whatever quantity one desired.

For the sellers, it seemed that an unspoken deal had been entered into with the police, who would hardly venture into the area despite persons walking around with large quantities of the weed.

But this changed recently as the cops raided the area, seizing more than 140 pounds of ganja.

Head of the Kingston West Police Division Superintendent Howard Chambers said the operation was part of efforts to regulate the use and sale of ganja in downtown Kingston, where persons openly flout the law.

“People still don’t know how to interpret the law. The legislation is very sensitive. People who are trading must have the particular licences. If we find you are smoking in public, you can be locked up. That is different from if you are smoking inside your yard,” said Chambers.

He added that while there has been no increase in the number of areas where ganja is being sold in downtown Kingston since Cabinet approved proposals to decriminalise small portions of ganja last year, certain corridors in the market district have been transformed into smoking havens.

“I don’t know how them carry it up nowadays. One of the times we caught up on the market trucks and set up some serious vehicle check points, but it is reaching the area, and you are likely to find more drugs in Grass Yard than any other area,” said Chambers.

The raid has not gone down well with the sellers, who, last week, complained that they had lost thousands of dollars in high-grade weed.

“Dem a pressure we because dem don’t want we sell it. Dem want fi sell it for demself,” argued Janet*, a 20-year ganja vendor who said that she lost 25 pounds of the weed to cops who used dogs to search every corner.

“Thursday morning di two side a di road full up wid police vehicle. Dem walk and knock up everybody. And anywhere nobody no deh, dem just use the cutter and open it,” continued a fuming Janet.

“Is 20 years now me a sell down here, and all now I don’t own a house. Every minute dem come in and dem just tek ‘way your things. Is the same stress.

“Dem say that you can have up to two ounces, but in here so dem don’t need a warrant when dem come. Dem do as dem feel like because dem know a weed yard.”

In Grass Yard, there is no limit on the amount of drugs customers can purchase – from pounds of weed costing thousands of dollars to a $20 stick of weed.

The ganja from Grass Yard is then transported all across the Corporate Area, where it is sold in smaller quantities. In New Kingston, 15-year weed vendor ‘Tallman’ clutched a few dollars as he slept on a crate on the roadside.

His snores brought another night of hustling to an end shortly after 6 a.m. last Thursday. He had been out selling since 8 o’clock the night before.

“It is all I know; I don’t know nothing else,” laughed Tallman as he recounted his time in and out of handcuffs and courtrooms for selling ganja in the prime commercial area.

“Me send me daughter go school out of it. Me buy car out of it. Only a house leave fi me buy yah now,” said Tallman.

“It’s easier and better than to go work for people. What some people are making for the week, I make that on a typical Friday night, sometimes up to $25,000, and that is about a pound and a half of weed wrapped out.”