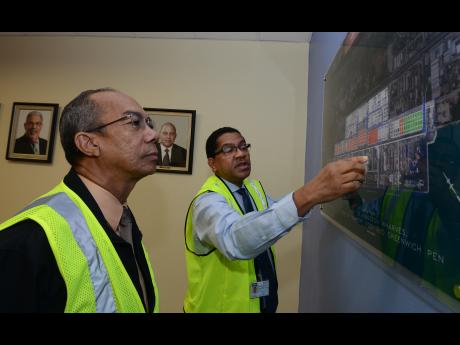 Ricardo Makyn
CEO of Kingston Wharves Limited Grantley Stephenson (right) explains a map of the port facility to minister without portfolio in the Ministry of Economic Growth and Job Creation, Dr Horace Chang, during a tour of Kingston Wharves on Thursday, October 27. 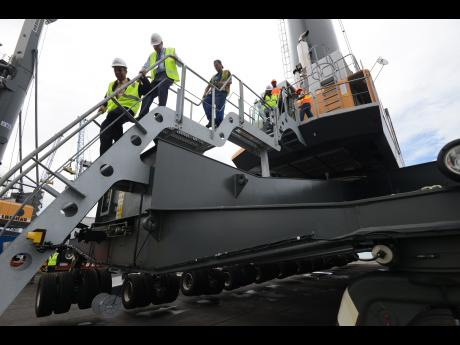 Ricardo Makyn
Minister without portfolio in the Ministry of Economic Growth and Job Creation, Dr Horace Chang, leads a team down from the new Liebherr crane during a recent media tour of Kingston Wharves.
1
2

One of the great obstacles to the country's aim of achieving its 'five in four' growth objective is the delays that people experience doing business here. You wait in long lines at the banks. In government agencies, you move from one department to the next, and then you wait some more. The documents needed to facilitate the processes are not always, if at all, centrally located and the faces you must encounter are less than friendly. But at least one company that is central to the Government's success at 'five in four' recognises that if the country is to realise this stated goal, then it cannot be business as usual. Kingston Wharves Limited has big plans. Here's a story that we carried online a couple of days ago about those plans.

Come next year, businesses and householders who normally spend up to a day or longer to clear containers and barrels with personal effects from the port in Kingston, will be able to do so within a few hours from Kingston Wharves Limited's new total logistics facility.

The port company is investing US$15 million in the state-of-the-art logistics complex, said Kingston Wharves Chief Executive Officer Grantley Stephenson, noting that it is on track to be completed by May 2017.

Construction of the 162,000-square-foot facility is being undertaken by BYD Construction, a China-based firm.

Project manager Keith Rigbye said that when completed, all containers will be taken directly from the wharf to the facility where there will be Jamaica Customs Agency scanners "and everything will be scanned before it goes into storage".

Rigbye explained that "when the customers come into the customer service hall to process their documents, their goods will be taken out of storage and taken into the customs inspection warehouse in the same building. So we can make it a one-stop shop, very efficient and hopefully they can get through in a couple of hours whereas, at the moment, they use three warehouses on the berth and it can take them all day".

Speaking to The Gleaner during a recent tour of Kingston Wharves, which included the logistics facility now under construction, the project manager emphasised that "this is to be a new, modern facility, the one-stop shop for anybody who's bringing in small goods into Jamaica".

Referring to a Maersk shipment that Kingston Wharves comfortably handled recently because it could not make it to The Bahamas due to the damage caused by Hurricane Matthew to the Freeport Terminal, he said "the idea is to continue to grow in that direction while we look at other opportunities for further growth". The warehouse activities from the berths at the port terminal, as well as some international logistics business, will be relocated to the total logistics facility. Stephenson said clearance of barrels, usually sent to families from relatives mainly in the United States, Canada and the United Kingdom, will be among the warehousing activities relocated to the new facility. "What we are moving to is a situation where the barrels will be pre-cleared. So the duty will be determined before the customer gets here and he can pay that online. So when he comes here, he just picks up his barrel, or whatever, and goes. That's where we are headed," the port company executive said.

'Only Singapore can compete with our strategic location'

The recent tour also took the media, board members, management and staff to the trans-shipment car park.

"About four to five years ago, we started this business of bringing cars here and then we trans-ship them to 23 different destinations in Central American and the Caribbean," Grantley Stephenson said.

Trans-shipment is handled on behalf of Japanese, Korean and other car carriers, but the main business is for Norwegian firm Hoegh.

"Jamaica has one of the most strategic locations anywhere, comparable perhaps only to Singapore. And you know how they have leveraged their location; and that's what we are seeking to do here," he said.

Kingston Wharves has now added grain silos to the main port terminal because, according to the CEO, "we are a multipurpose port. As you see, we handle cars, containers, lumber, steel; we handle sulphuric acid, cooking oil, barrels, everything."

Stephenson said one warehouse has already been demolished as part of the process to shift some of the port business to the logistics facility, and others are expected to be demolished within the first half of 2017.

Kingston Wharves has invested about US$30 million over the last 18 months on equipment, purchase of land and other activities and is set to invest significantly more in other phases of the development.

"Our goal is to transform this area into an industrial complex and to take full advantage of the logistics opportunities which exist, trans-shipment opportunities, not just for containers but for cars, arising from the expansion of the Panama Canal," Stephenson said.