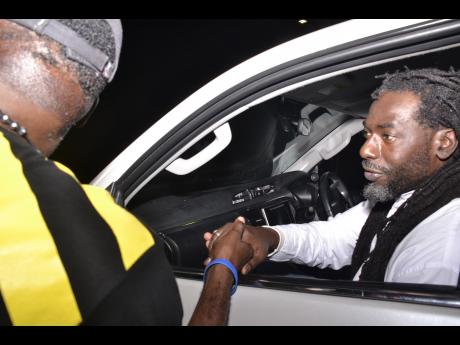 Jamaican reggae superstar Buju Banton rewarded a handful of fans who camped outside his St Andrew recording studio last night after his return to the island.

The small group of fans who camped out near the studio, located on Carlisle Avenue, off Red Hills Road, was able to get up close and personal with the entertainer, whose real name is Mark Myrie.

Buju arrived in the island last night after serving a nine-year prison sentence in the United States for a drug conviction.

Scores of fans, with cellphones at the ready, camped out at the Norman Manley International Airport, in Kingston to see the popular recording artiste.

But they were left disappointed as the ‘Destiny’ singer was whisked away from the airport through an area often used by dignitaries.

Outside his St Andrew recording studio, it was a game of wait-and-see on whether Buju would visit the location.

Shortly before 10p.m. the front gate swung open and a white pickup van with all the windows rolled up drove through.

“A Buju inna dat?” one person outside the premises asked.

But even before the question could be completed, loud screams of excitement from inside the premises gave it away.

After a few minutes, the vehicle was on the move again.

But this time it stopped, allowing the entertainer to greet his ecstatic fans.

He shook hands with almost everyone who ran to the vehicle while some tried to ‘snap’ a few picture and video clips with their phones.

Soon the vehicle began rolling again, but Buju promised to return after visiting his father.

“Mi affi guh look fi mi father and come back,” he said, as the van drove off.

Minutes later he was back at the recording studio, but left almost immediately, this time in a red jeep.

Vivian Thompson, with his girlfriend and daughter in tow, was one of the first person to take up position outside the recording studio.

Thompson said he went to the airport, but the man he referred to as "the general" had already left.

“Is a joy fi see di general back, over the years, he is my icon. A mi friend like that suh mi mek it my point of duty to see him tonight cause is a joy fi see mi friend release and come back a yard,” he explained.

“Mi guh airport but by the time mi guh out there the radio car pass mi but mi did affi welcome home mi friend, di great Gargamel,” he shared.

We want to hear from you! Send us a message on WhatsApp at 1-876-499-0169, or email us at editors@gleanerjm.com or onlinefeedback@gleanerjm.com