Teacher’s Assistant robot: First of its kind in the world 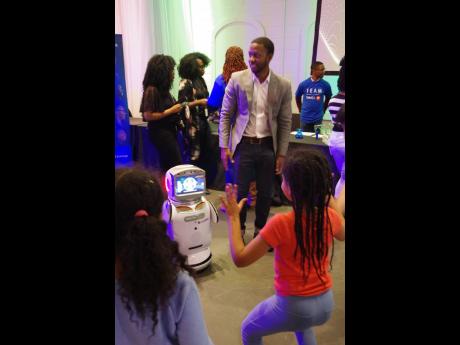 Two years ago, international systems integrator, GlobalDWS, approached Dwayne Matthews, a former schoolteacher, asking him how they could use one of their solutions areas: robotics, drones and autonomous vehicles (AV) in education. Together they have created The Teacher’s Assistant robot – the first of its kind in the world.

“We are a solutions-provider and some of our solutions come in the form of robots,” says Armeed Hadizadah, who works on The Teacher’s Assistant application with Matthews. Hadizadah explains that the idea behind the robot is to reduce some of the tasks classroom teachers have to do. This particular robot will help teachers do their mandatory, bi-weekly reading assessments with children.

“Almost no teacher has time to do that in a class of 25 to 30 students,” says Matthews, now an education consultant with GlobalDWS. “What we realised is, when we have assessments, typically, what we do is assess an entire class and we normalise it,” says Matthews.

This means some children may get left behind and some misdiagnosed. Unacceptable in a developed country, like Canada, that is ranked the third best country in world for education, according to various statistical studies worldwide, such as Global Partnership for Education ( worldpopulationreview.com) and US News & World Report, in partnership with Y & R ’s BAV and Wharton ( dailyhive.com).

To accurately assess a child’s level, you must do lots of assessments in that area. Matthews, wearing his teacher’s hat, knows first-hand that a typical child may not be at the same level in every subject. “So, for example, your child is 10 years old. They read at a grade-nine level, does math at a grade-six, writes at a grade-four, but is in Grade Five. It is impossible for a teacher to be able to grab that, unless they can take lots of information on assessment,” says Matthews.

GlobalDWS built The Teacher’s Assistant to Matthews’ specifications. It is designed to do reading assessment tests for the teacher and report any miscues. “The artificial intelligence (AI) analyses what they’ve read and will find every single miscue, which is a type of mistake that a student can make. There’s six to eight miscues,” explains Matthews. The teacher receives the results electronically and does their analysis work. The teacher will see the reading passage, what mistakes were made, how many times the child made the mistake and where the mistakes were made, all in real-time. In the process, a history of the child’s reading patterns and progression is captured throughout the child’s life in that school, and it reduces the risk of misdiagnosing a child’s reading abilities. “So right now, if somebody says this child is having trouble, what does that mean? It means they may be having trouble with this type of miscue. In the past, I might have felt that I couldn’t read, but that’s not the case. So the idea is to recognise where the problem is and fix it,” says Matthews. Strategies for each miscue identified during the reading assessment are sent to the teacher for implementation, to help that specific child.

In regards to concerns about screen time in classrooms. Matthews says technology has become so integrated into our lives that we forget that it has always been there. “A book is cutting-edge, 600-year-old technology,” explains Matthews. He asks, “Do you let all books into schools? (The correct answer is no). You have specific books for a specific purpose. Can we have specific screens for a specific purpose? (The correct answer is yes). When people say screen time, it’s very broad,” says Matthews.

Matthews says, the conversation is not about the technology itself, but about, what do I want to do and what technology do I get to do it? “So, the next wave – and this is cutting-edge. This is the first of its kind in the world, – How do we start using technology to do what we want?” says Matthews. Also cutting-edge is The Teacher’s Assistant which features a robot that is culturally diverse. The cartoon face of the robot is black. “This is it. The first one in the world. There’s not another robot in the world with a black face,” says Matthews. Other features of the robot are face and voice recognition, mobility and has games.

The Teacher’s Assistant is top of the line, the Rolls-Royce of cars, and costs $5,000. But, if you can’t afford the robot, not to worry. The agent can be transferred to laptops, desktop computers and tablets. “The brain is called the agent, and we can create different types of agents,” says Matthews. The Teacher’s Assistant can also be provided with agents that can detect dyslexia and autism in children.