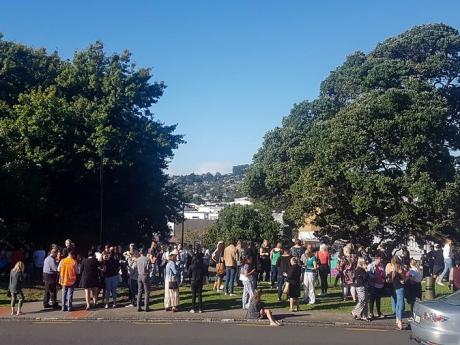 People gather on high ground in Whangarei, New Zealand, as a tsunami warning is issued Friday, March 5, 2021. A powerful magnitude 8.1 earthquake struck in the ocean off the coast of New Zealand prompting thousands of people to evacuate and triggering tsunami warnings across the South Pacific. (Mike Dinsdale/New Zealand Herald via AP)

WELLINGTON, New Zealand (AP) — One of the biggest earthquakes to hit the South Pacific in modern history forced thousands of people in New Zealand to evacuate and triggered tsunami warnings across the world Friday, but it did not appear to cause injuries or major damage because it struck in remote ocean.

The magnitude 8.1 quake was the largest in a series of tremors that hit the region over several hours, including two earlier quakes that registered magnitude 7.4 and magnitude 7.3.

The earthquakes triggered warning systems and caused traffic jams and some chaos in New Zealand as people scrambled to get to higher ground, but their remoteness meant they did not appear to pose a widespread threat to lives or infrastructure.

The largest quake struck about 1,000 kilometers (620 miles) off the coast of New Zealand. One of the earlier quakes hit much closer to New Zealand and awoke many people as they felt a long, rumbling shaking.

“Hope everyone is ok out there,” New Zealand Prime Minister Jacinda Ardern wrote on Facebook during the night.

After the largest quake, civil defense authorities in New Zealand told people in some coastal areas to immediately get to higher ground. They said a damaging tsunami was possible, and waves could reach up to 3 meters (10 feet).

“They felt the long or strong earthquakes and they knew to grab their bag and head into the highlands,” she said. “I can only thank and acknowledge the tireless efforts of the men and women from up and down the coast who knew how to act, when to act, and what to do.”

She warned that the threat could remain throughout much of the afternoon and people should not return home until authorities gave the all-clear. Allan said evacuations took precedence over coronavirus distancing measures.

The U.S. Tsunami Warning System also cautioned the quake could cause tsunami waves of up to 3 meters (10 feet) in Vanuatu and up to 1 meter (3 feet) in Australia, Fiji, French Polynesia and as far away as Mexico and Peru.

The U.S. Geological Survey said it was centered near the remote Kermadec Islands at a depth of 19 kilometers (12 miles).

The agency said in a report that the quake occurred at the intersection of the Pacific and Australia tectonic plates and eclipsed the largest quake previously recorded in the region, a magnitude 8.0 in 1976.

It said the interaction between the plates creates one of the most seismically active regions in the world, and it has recorded 215 quakes there above magnitude 6.0 over the past century.

In 2011, a magnitude 6.3 quake hit the city of Christchurch, killing 185 people and destroying much of its downtown.