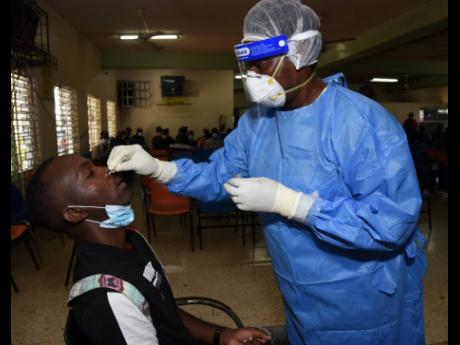 Ian Allen
Novlet Lewis, anaestethic technician, administers a COVID-19 test on Leon Bailey, one of scores of farm workers who turned out at the Ministry of Labour and Social Security’s East Street offices in Kingston on Tuesday. 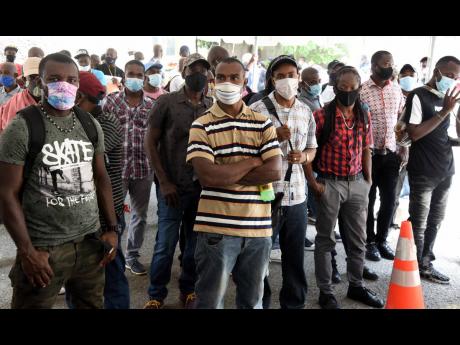 Ian Allen/Photographer
Dozens of farm workers gather to undergo COVID-19 testing at the Ministry of Labour and Social Security’s East Street offices in Kingston on Tuesday. Tests were done on more than 200 workers on Tuesday to fall within the 72-hour window for international travel.
1
2

Director of the Overseas Employment Programme in the Ministry of Labour and Social Security, Delroy Palmer, says Jamaican farm workers travelling to Canada and the United States have the option of getting vaccinated while overseas. By this weekend...

Director of the Overseas Employment Programme in the Ministry of Labour and Social Security, Delroy Palmer, says Jamaican farm workers travelling to Canada and the United States have the option of getting vaccinated while overseas.

By this weekend, 630 Jamaican farm workers are expected to leave the island for the week, bringing the total number of persons to have travelled to Canada on the overseas work programme since the start of the year to 2,500.

Palmer told The Gleaner that the companies in Canada and the United States that are receiving farm workers from Jamaica have indicated that arrangements could be made for employees to get the jab if they desired.

“It is not mandatory, but we encourage them to participate in that programme,” Palmer said.

Since the emergence of the coronavirus in Jamaica, farm workers have had to indemnify the Government against liability if they contract COVID-19 while in Canada or the US.

The Ministry of Labour’s offices on East Street in Kingston was buzzing with activity on Tuesday.

Hundreds of farm workers converge on the facility to undergo a COVID-19 test that is a new stipulation for the work programme before boarding a flight to Canada and the US.

Palmer said that the process to prepare farm workers for the Canadian and United States programme has changed since January this year.

“It is a requirement by the Canadian and US authorities for Jamaican farm workers to do a COVID-19 test 72 hours before they leave the island,” Palmer said, adding that when they arrive in Canada and the US, they also undergo a second COVID-19 test.

The Ministry of Labour and Social Security and the Ministry of Health and Wellness entered into a partnership whereby health personnel assist in administering the COVID-19 tests.

The partnership started from January 13, when it became a requirement for the workers to be tested prior to their departure for Canada.

Palmer told The Gleaner that a total of 144 farm workers have tested positive for the virus since testing started on January 13.

He said those tested positive had to sit out the stipulated quarantine period before making themselves available for retesting at a later date.

On Monday, 223 farm workers were tested for the virus and are expected to leave the country today for Canada.

A second batch of 219 workers, who did their tests on Tuesday, will leave on a charter flight for Canada on Friday.

Palmer said that the farm workers were selected from across the country to participate in the overseas work programme.

“The farm worker plays a very significant role in the agriculture department in the USA and Canada. For now, flights to Canada have been temporarily suspended,” the Overseas Employment Programme boss said.

“However, our farm workers continue to be a priority group to enter Canada to continue the industry.”

Up to the end of March, a little more than 1,900 farm workers have made the trip to Canada.

“For this week alone, we’ll be sending another 630 workers. Some have already departed on April 1, and we have another two flights going out this Thursday (April 8) and another one on April 9.”

Palmer said that the farm workers provide significant assistance to their families back home by sending remittances to them.

“The remittance is very significant and maybe this is one of the only industries now that remains viable as far as remittance is concerned,” he said.

Farm workers stay an average of six weeks to eight months in Canada, depending on the type of agricultural activities in which they are engaged.