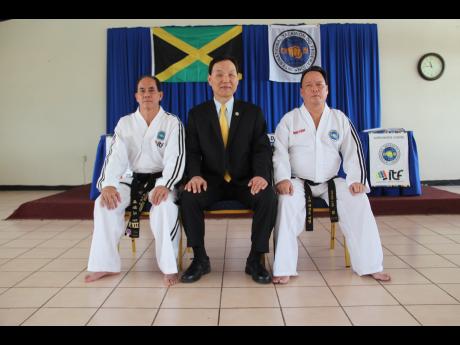 Grandmaster Han Sam Soo, one of the pioneers of Tae kwon do, who had introduced the martial art to Jamaica in 1974, said the International Olympic Committee (IOC), which recognises the World Taekwondo Federation (WTF), should once and for all "reach a compromise" to accept the International Taekwon-Do Federation (ITF) into its fold.

Han, 71, was recently honoured by ITF-affiliated Jamaica Taekwon-Do Association at a ceremony in Mandeville, Manchester. Now retired and living in Canada for the last 26 years, Han was sent to Jamaica four decades ago by the founder of tae kwon do, the late General Choi Hong Hi, who was born in Korea before the North-South divide.

Han, also a Korean, spent three years in Jamaica establishing tae kwon do, training early pioneers, now masters, Claude Chin and Peter Lue, but left in 1977 due to what he described as a "civil war".

"Otherwise, I would have stayed. I like Jamaica. During this visit, I see Jamaica has not changed, very happy and relaxed," he said.

He was elated to see his former students upholding the principles of 'tae kwon', "foot and hand technique to defend yourself and others", and , 'do', "the way of life based on the tenets of tae kwon do - courtesy, integrity, perseverance, self-control and indomitable spirit".

However, Han was visibly sad that the martial arts General Choi founded in 1955, split into three different ITFs plus the WTF.

"The WTF was started in 1973 in South Korea after General Choi left the country for political reasons. General Choi was born in Korea when it was one Korea, but went to Japan to study. He joined the Japanese army then the South Korean army," Han explained.

"When General Choi moved from South Korea to Canada with the ITF, South Korea decided to call themselves World Taekwondo Federation, just to kill the general's organisation," he pointed out.

"WTF should have used a different name. It's like calling a beer a whiskey, saying it's the same alcohol. The IOC knows ITF is the original tae kwon do but are holding hands for profit. We have to make a compromise and change the rules. All they are doing is slowly copying the ITF style," he pointed out.

"However, money and politics talk. The WTF is controlled by South Korea. General Choi and myself had met a few times with Juan Samaranch. He knew but didn't want to recognise ITF because of money and politics," Han added.

The late Samaranch served as the seventh president of the IOC from 1980 to 2001.

Meanwhile, General Choi's ITF splintered into three groups shortly before and after his 2002 death. One is located in North Korea, where he had gone in 1980 and had started teaching the art in 1981. This was much to the displeasure of his son, Choi Jung Hwa, who, after his father's death, started his own ITF, now headquartered in the United Kingdom.

The third piece of the ITF puzzle, based in Alicante, Spain, to which the Jamaica Taekwon-do Association is affiliated, was explained by Han as General Choi's then vice-president, Pablo Trajtenberg, being elevated to president, "western people who wanted to stay out of the politics", he added.

Now a travelling statesman in tae kwon do, Han returned from a 10-year hiatus after Choi's death to join forces with the general's son's ITF as an advisor.

However, he said he is open to "help any member of ITF". "I will go anywhere to help tae kwon do," he said.

Han is also an advisor to the 36-member council Global Taekwon-Do Federation International (GTFI), headquartered in Malaysia. Its members are from 20 countries including USA, Spain, Armenia, Russia, Canada, Malaysia and others.

GTFI is a professional tae kwon do body formed to bring all tae kwon do groups together without politics or other restrictions, which, its website said, "has destroyed many tae kwon do organisations.

"We are waiting to make one banner, have one big world championships," Han said, with, at last, a glimmer of hope in his eyes.