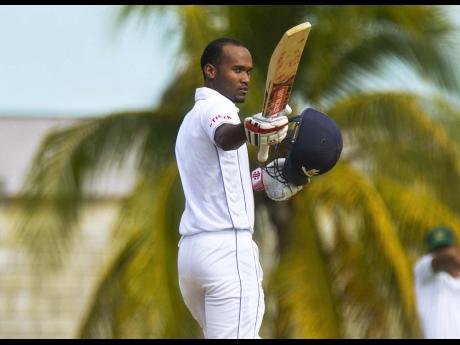 He was joined by West Indies teammate Shai Hope, who gathered his fifth first-class hundred as Pride, choosing to bat first at Kensington Oval, ended the day on 293 for two.

Brathwaite struck 143 while Hope entertained with an unbeaten 118, the pair putting on 205 for the second wicket in a partnership that pulled the hosts around from 45 for one after left-hander Anthony Alleyne perished cheaply for eight in the first session.

Playing only his second game of this season's regional four-day championship, the 24-year-old Brathwaite immediately made his presence felt.

Hope, meanwhile, extended his rich vein of recent form, counting 15 fours and two sixes in a knock spanning 257 deliveries and just under five hours at the crease.

For Hope, it was his third hundred in seven games, following his back-to-back efforts in the semi-final and final of the Regional Super50 last month.

Brathwaite combined with Alleyne to add 45 for the first wicket and safely navigate the first hour for the hosts.

However, Alleyne seemingly lost concentration following the drinks break and fell to the second delivery, wafting at a short ball from left-arm seamer Raymon Reifer and nicking a catch behind to wicketkeeper Shane Dowrich.

Any hopes Jaguars had of slicing through Pride's top order were then dashed, however, as Brathwaite and Hope combined to keep the visitors wicket-less for the remainder of the session and the entirety of the post-lunch period.