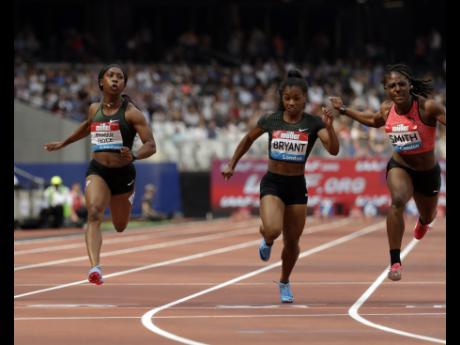 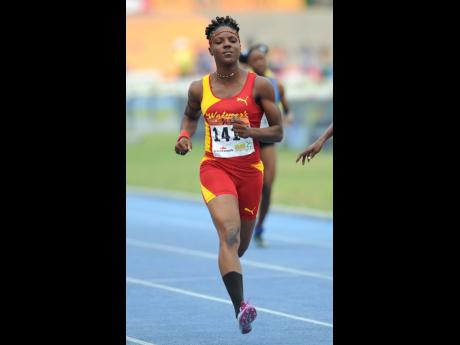 Ricardo Makyn
Jonielle Smith competing at the 2014 ISSA/GraceKennedy Boys and Girls Athletics Championships during her days at Wolmer's High School for Girls.
1
2

Making the transition from a collegiate athlete to a professional can be an arduous task, but a little motivation from two-time Olympic 100m champion, Shelly-Ann Fraser-Pryce can make a world of a difference.

Before recent Auburn University graduate, Jonielle Smith took the track for her first Diamond League outing in London last weekend, she was overwhelmed with nerves, she told The Gleaner. But a 'high- five' from Fraser-Pryce before the start of the race, gave Smith all the motivation she needed to register her 11.07 seconds personal best.

"Honestly, I was nervous especially in the heats, I was really nervous but in the final Shelly-Ann (Fraser-Pryce) came to me and she like high-five me and said' let's go' and I think that was like the game changer for me. That got me ready and when the gun went off I just go," said Smith, who like Fraser-Pryce was a standout athlete at Wolmer's High School for Girls.

She finished third in the race behind Fraser-Pryce and Dezerea Bryant of the USA. The American stopped the clock at 11.04 seconds, while Fraser-Pryce recorded her first sub-10 clocking, 10.98, since coming back from childbirth.

And now that she has gone through her first Diamond League outing with a good showing, Smith is now ready to stake her claim as a professional athlete at the 23rd staging of the Central American and Caribbean (CAC) Games in Barranquilla, Colombia.

Smith, who will be representing the country in the 100 and 4x100 metres at Games, told The Gleaner before jetting off to the South American country on Tuesday, that she will be using the meet to fully make the transition from a collegiate athlete to a professional.

"I am using the CAC Games to practise my race execution and help with my transition from a collegiate athlete to a professional athlete and this is my first major championships as a senior athlete running individually. I want to focus on my race and not my competitors' race," Smith said.

The athlete is now based in Florida with newly formed MVP International track club, an extension of MVP track club, which is based at the University of Technology, Jamaica.

"I am now based in Florida with MVP international group. Auburn gets really cold in January and February, so I think that will help our progress with Miami being hot," Smith said.

The group is headed by Henry Rolle, who seemingly has ended the decades old marriage with Auburn University.

"The group was formed to give athletes the choice of staying in America, while still having that foundation that MVP has here in Jamaica," Smith explained.

Quarter-milers Nathon Allen and Akeem Bloomfield are also part of the group.