Dudus supporters target Phillips, 'I am not afraid' 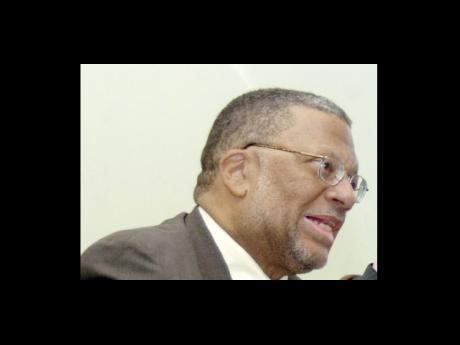 The former national security minister hit back yesterday, declaring that he remains undaunted by the attacks.

"I am not going to be intimidated," he declared in an interview with The Sunday Gleaner.

"I merely asked some questions … . I have not asked or demanded that anyone be extradited, I have simply asked that the matter be placed within the purview of the court of law."

Phillips, who has been playing a leading role for the Opposition in the extradition row between the Bruce Golding administration and the United States, warned that law-abiding Jamaicans could not surrender to intimidation at this time.

"If we back up and go into our houses, we would have surrendered our rights to criminals," Phillips argued.

Yesterday, in broaddaylight, the perpetrators turned their attention to Duke Street in the vicinity of Gordon House, defacing areas near a small garden containing murals of political leaders of the past.

In stark contrast, a stone's throw away, the funeral for former Tivoli Gardens Shower Posse strongman, Vivian Blake, was held without the colourful fanfare usually accorded to dons.

It was a service for a forgotten lieutenant who once dominated the powerful West Kingston base.

Over the past 72 hours, with increasing frequency, strident criticisms of Phillips have been scratched, painted or sprayed on walls or other surfaces in public places in West Kingston.

The graffiti were not confined to the traditional strongholds of the Jamaica Labour Party (JLP) but found their way into powerful People's National Party enclaves in West Kingston as well.

Etched big, bold and brazen on the wall of the Kingston Public Hospital (KPH) are the words 'Peter Phillips sell out black people'.

The KPH is located between two PNP strongholds - Hannah Town to the north and Matthews Lane to the south.

But Horace Levy, the outspoken peace advocate who frequents volatile communities, has refused to give significance to the graffiti.

He described them as a calculated move orchestrated by a worried JLP to slander Phillips.

He suggested that Phillips was being targeted because he seems to be the point man in the Opposition in relation to both the extradition and the Manatt, Phelps and Phillips-Harold Brady affair in which the JLP administration is embroiled.

Levy argued that the presence of the graffiti in PNP strongholds does not mean anything. "Men could have gone into PNP communities into the night, sprayed them on the walls, and got away with it."

But there are others in West Kingston who are of the view that Matthews Lane has been estranged from Phillips since Donald 'Zekes' Phipps, the leader of that section of West Kingston, was placed behind bars two years ago on a double-murder conviction.

They claim that Phillips turned his back on Zekes, who supported him in the 2006 presidential election.

Phillips, who maintains that he will not support any form of criminality, was depicted in graffiti painted in other communities as being an informant to the Central Intelligence Agency of the United States.

For Levy, this clearly suggests that the plan was orchestrated by the JLP.

Phillips stressed that he had no evidence to suggest that the JLP was behind the graffiti.

However, JLP General Secretary Karl Samuda has dismissed the claim. "As far as the JLP is concerned, we are unaware of any plans by supporters to execute these acts."

However, he agrees with Levy that whoever is behind it is afraid. "They are fearful that law and order can be maintained," he declared.

But even as the attacks continue to increase in frequency and number, the former PNP vice-president defiantly refused to mince words.

"It is obvious, as we have always known, that there are elements under don control not just in West Kingston, but elsewhere as well, who have no respect for the rule and forces of law and order," declared Phillips.

"Decent Jamaicans must take a stand or lose the country to criminal forces," he added.

A resident of the community told The Sunday Gleaner that he was taken aback by the latest developments.

"It was with some amount of shock that I arrived on Princess Street this morning to see the wall of KPH adorned with graffiti critical of Dr Peter Phillips, given the political flavour of those communities, which would render such graffiti out of place."

The resident said it would seem to suggest that there is tacit support from these communities for the West Kingston strongman. "There could also be an underlying political message which the PNP should take stock of."

But Phillips argued that the issues confronting the country transcended party political variables.

"I don't think this is a matter of politics … . It speaks to what kind of country we are going to live in," he asserted. "We cannot allow this country to degenerate into jungle justice governed by wanton disregard for law and order."

Phillips also suggested that many residents in garrison communities are simply falling in line out of fear. "People who suffer are the poor and defenceless and may have succumbed to the fear imposed on them by criminals," he told The Sunday Gleaner.