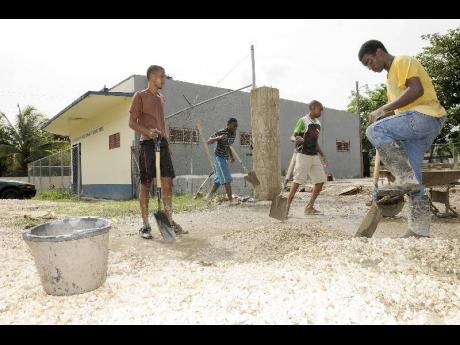 Young men from the area finish up the resource centre at the Penwood Church of Christ, which two-time Olympic champion Shelly-Ann Fraser-Pryce has helped to develop. - Gladstone Taylor/Photographer

After retaining the women's 100m Olympic title, Shelly-Ann Fraser-Pryce's enthusiastic thanks to God surprised some.

But members of the Penwood Church of Christ knew that their beloved congregant had been a 'church girl' for years. Senior Pastor Winston Jackson remembers her growing up in the congregation.

"She used to attend the early childhood institution and I think she was baptised when she was about age 12," he said. "We saw her through school as a church family, because she had some early struggles."

Jackson was pleased that, circa 2011, she made a recommitment to the Lord.

"We are proud of her whole stance. She's just excited about the Lord and she realises that it's not her, it's really God. You can see the change in her. You see a significant difference in how she talks about God. She's much more excited about her Christianity, and she recognises that this is a divine thing that's happening to her," he said.

Not the upfront type

"It's difficult for her to be on a church committee," he said, noting her busy schedule. "But if you understand Shelly, she's a behind-the-scenes person. If she's going to help somebody, she will do it in private. She doesn't like all the excitement."

Jackson said he felt that despite being thrust into the limelight due to athletics, Shelly-Ann maintains a charming child-like persona.

"I wish that she would get some more courage but, in Kingdom matters (giving back), nothing is wrong with being reserved. It's just that you want people to know she is giving back."

He said Fraser-Pryce has helped individuals with their schooling and has contributed to the church's community resource centre across the street.

Jackson said the young people especially look up to her and believe that should she "fall", many would go with her.

"I hope and pray that she keeps it up. I hope she will serve as an example, not just for this area, but for all young people. So that way people can see that you can be in the limelight but still be able to function in your Christian walk."