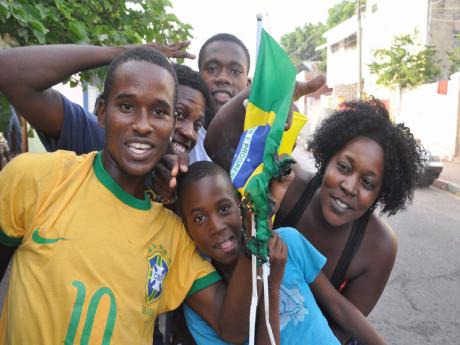 Residents of Wildman Street, Kingston, were seen burning Brazilian flags following the 7-1 shock defeat to Germany in the semi-final of the World Cup on Tuesday, July 8. - Jermaine Barnaby/Photographer

Everyone knows that I wanted an African team to win the World Cup or one with at least a large number of black players. My hope for the final was that a pretty damsel and detractors would line up and kiss my black side on the podium. However, that was not to be; so I prayed for a Brazilian miracle, until the fourth goal and wanted the Argentines to find Nederland, very undutchable.

Almost half of the Dutch team looked like Delroy or Tyrone, although only 2.8 per cent of its population is black. If the Moroccan-originated residents are included, it's still less than five per cent. Still, the majority of Jamaicans from my generation hug up Brazil like a close relative, and some extremists actually refer to that country as 'we', even to the ridiculous extent of saying, "Reggae Bwoyz dem can beat 'my' side."

While during the World Cup I was annoyed by the myriad Chinese-made alien flags being displayed, some illegally, it is Brazil that was my castor oil and milk powder. Among the realistic favourites, Germany still reeks of the Holocaust for me, and its ape references to Asamoah and others tell me it is not ready for the black vote. Italy seems very upset with its black spaghetti Balotelli, and players in its Premier League face racial taunts. Mexico and Argentina have skilfully erased blacks from their history, if not geography, and although almost half of Jamaica's population lives in the United States, nobody expects them to win unless the sport includes LeBron James.

Jamaica's fascination with Brazil and identification with that nation's football is strange, because we had our own international hero, Lloyd Lindbergh 'Lindy' Delapenha, who broke all kinds of barriers in becoming the first Jamaican to play professional football, having signed with Portsmouth in 1948. Lindy had already built up an impressive resumé before the iconic Pelé touched the World Cup stage in 1958.

However, though a native, Lindy is a 'brown man' who speaks English with an upper middle-class accent and went to a prestigious high school where the students don't even breathe the same air of the average Jamaican living 700 metres lower, at sea level. Thus, he doesn't mirror the typical yaadie.

After winning the World Cup for the third time, in 1970, and retiring the Jules Rimet trophy, Brazil, epitomised by Pelé, instantly became a proxy for Jamaican pride. Their jerseys were gold like ours, with touches of green. More important, Pelé had so much pigment that even today at 73, his grey hairs are black. Then when he visited Jamaica in 1971, with the Cup's perfume still lingering on him, he played in our stadium, met with the natives, and even gave my brother an un centavo coin as a souvenir.

Our romance with our 'Jamaica in South America' lasted for the next decades because the 'Pearl' was us and we all wanted to play football like him. Thus, even when we went through various successors; from Zico, to Socrates, to Romario to Kaka, to Ronaldinho to now Neymar, it is really Pelé we are cheering for.

Nevertheless, there is something insidious about Brazil, and after becoming an academic, my knowledge conflicted with my heart. Brazil is the last country in this hemisphere to have abolished slavery, only doing so in 1888. Brazil is the second blackest country on Earth, the destination of 37 per cent of all expatriated Africans during the transatlantic slave trade between the 1400s and 1800s. Around 86 per cent of Brazilians have at least 10 per cent African DNA. This means that 173 of the 202 million are black. This compares with the 177 million Nigerians. Yet, survey data report 47.7 per cent self-identifying as white, 43.1 per cent as mulatto and only 7.6 per cent accepting the black label.

Brazil is a place of extreme prejudice and black is devalued. Indeed, there are subtle gradations of colour categorisation that would bewilder Picasso. For example, although obvious to the average football fan that Ronaldinho and Pelé are black, they belong to different 'races'. In fact, poor Neymar, whose hair looked like Velcro as a teenager, not only 'creamed it', but seems to have 'Kartelised' his skin colour in his bid to become the World Cup Boss. Pathetically, in a 2010 interview, he said, "I'm not black, right?"

Often ignored, Pelé's inclusion in the national squad, in 1957, was initially opposed for apparent racist reasons. Therefore, he had to have been so superior to his teammates for his race to be overlooked. Before Pelé, Leonidas da Silva had earned Brazil's first black cap in 1938, scoring four World Cup goals. The 'Black Diamond' had stood out for two years in the domestic league, characterised by apartheid until around 1920. One club, Fluminense, masked its black players with rice powder. Amusingly, the sweat often washed away enough of it to unmask the truth. Nonetheless, the nickname Pó de Arroz (rice powder) has remained with the team.

In this recent staging, black faces were not only under-represented in the starting line-up, but were missing from the stadiums as well because tickets were priced to exclude most blacks. Despite the ever-present banners denouncing racism, the situation is analogous to a community relations police vehicle being involved in extrajudicial shooting allegations.

Brazil's dark-skinned blacks have high levels of homelessness, unemployment and poverty, and earn half the income of whites. Not one of Brazil's CEOs listed on the stock exchange is black. Perhaps 10 of its 503 members of Congress have strong melanin, only two out of 23 state governors are black, and Brazil is without a black ambassador.

As for the World Cup, the Brazilian people have footed a bill of US$12 billion, three times the South Africans' 2010 sum. Around 250,000 citizens were made homeless in order to construct stadiums, joining the pre-existing 1.8 million street people. By the way, they might have copied from the Chinese, who displaced 1.25 million in preparation for the 2008 Olympics. Moreover, Brazilian police are reported to have used excessive force in quelling the protests over the removals.

So, guess what? The situation of blacks in Brazil will have worsened after the Cup, and the aggregate 10-1 drubbing from Germany and Nederland is the least of their reasons to cry.

Hopefully, Jamaica can get to the Finals soon, and go for Cup, so that we can proudly fly our national flag as these clowns did with the bumper crop of foreign cloths for the past month.