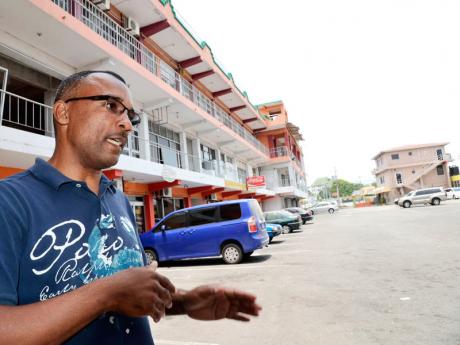 Tenants at the dispute-afflicted Baron's Plaza on Constant Spring Road in St Andrew are now restive following a notice issued to them last Friday that they will have to vacate the premises by the end of August.

The tenants say they are worried that the deadline is too short for them to just pick up and leave following years of operating there.

Andrew Osbourne, proprietor of Osbourne Decor at Shop #4 on the plaza, showed The Gleaner a copy of the notice that was issued to some of the tenants under the letterhead of the law firm Jennifer Messado & Company.

The correspondence, which is dated July 18, 2014, states that Josa Investments Limited are now the owners of the complex and the tenants are to leave the property by August 31.

"This is to advise that Josa Investments Limited are now owners of this complex and you are not to pay rental to any other person or agent purporting to be in charge of same," the letter stated.

"Our instructions are that you are to vacate the premises by the 31st of August, 2014 and a formal notice will be delivered to you shortly," it further stated.

However, Osbourne said this entire arrangement has left some of the more than 30 tenants in a state of confusion, as August 31 is not enough time for them to move their businesses.

The letter also indicated that Josa Investments was unable to continue providing water and haulage of sewage from the plaza, which houses businesses ranging from restaurants to beauty salons.

"We are still not yet fully informed of what the whole thing is going to be about ... . There is no security, there is no water and no maintenance to clean up the place," Osbourne lamented.

He said he was aware that he and the others are tenants and therefore subject to being given notice, but argued that they were being treated unfairly.

"First of all, at least a meeting should have been called and then drop off the letter in that meeting. So, at least we would have somebody to talk to and have something in writing," Osbourne added.

Another tenant, who wished not to be named, said he was concerned about the advance he paid on his lease.

Noting that he had paid about three years in advance on his lease last year, he is now concerned that all that money will go down the drain.

He said he was not averse to staging a protest and going through legal channels to reclaim the sum he paid on his lease.

"Nobody come here and say anything to us. What about those of us who pay lease up front? Some tenants have all five-year leases. What will happen to them?" the irate tenant queried.

A July 7 letter from the law firm Clough, Long & Company stated that as at July 4, Josa Investment Limited was the owner of the property, after acquiring it from the administrators of the estate of Rudyard Baron Stephens.

In 2011, the Kingston and St Andrew Corporation had threatened to demolish Baron's Plaza because it was illegally erected.

The plaza has also been the centre of a long-standing dispute between its owners and the proprietors of the neighbouring Market Place. The matter between the two was, up to 2012, before the courts.

Attempts to reach representatives of Jennifer Messado & Company were unsuccessful.