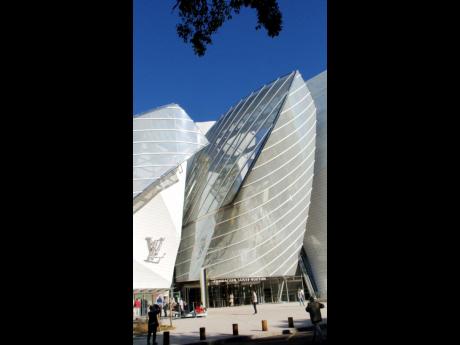 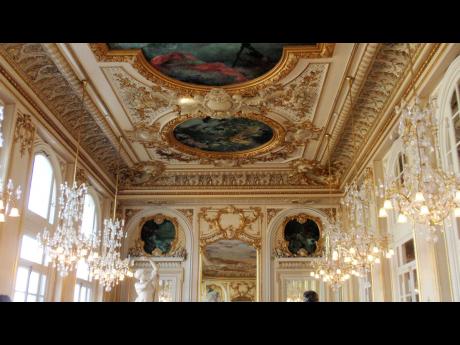 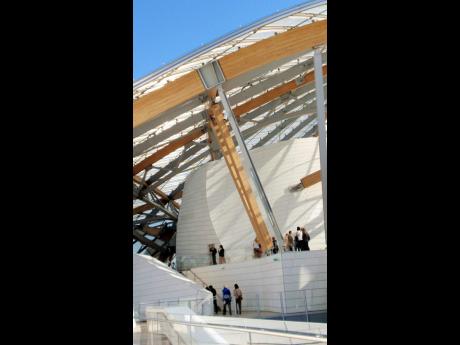 Laura Tanna
On the terrace of Fondation Louis Vuitton. 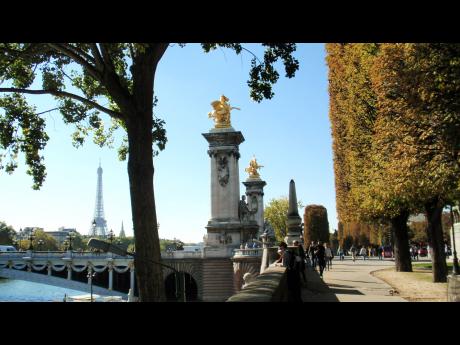 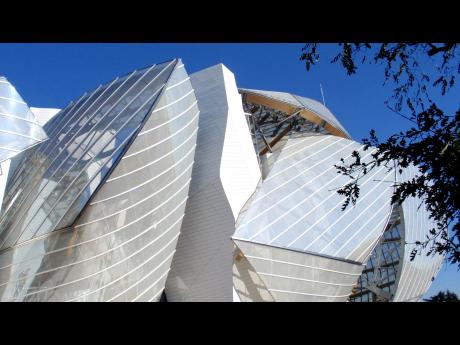 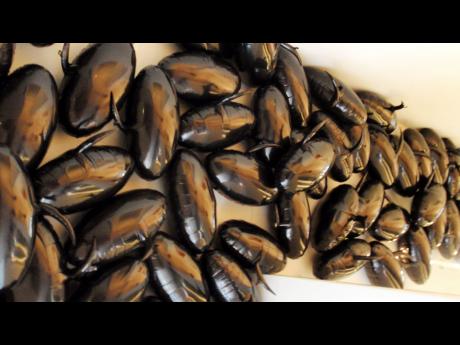 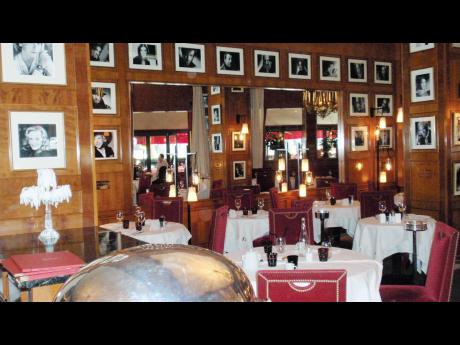 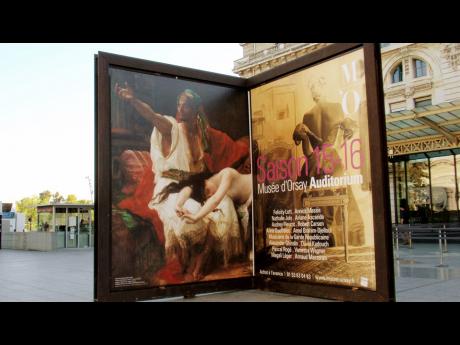 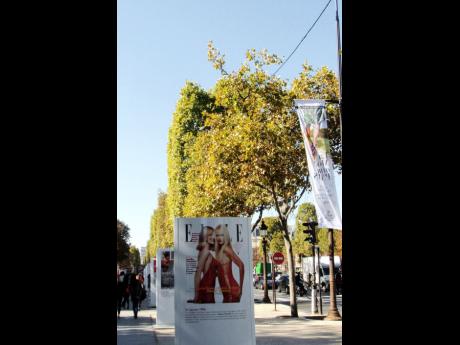 Laura Tanna
Fashion Week in Paris with Elle Magazine covers along the Champs-Elysees. 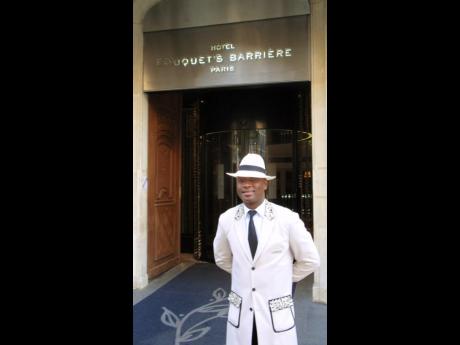 Paris during fashion week at the end of September is a joy. Trees along the Champs-Elysees are turning golden, blow-ups of archival Elle Magazine covers with gorgeous women catch your eye, as do banners blowing in the breeze on street lights above. Cyr Mathieu, HÙtel BarriËre Le Fouquet's handsome doorman in his Panama hat, welcomes us to this stylish hotel, its lobby gold and black, walls lined with photographs of famous actors. Marilyn Monroe and Grace Kelly gaze across the bar while chef concierge Yannick Bastoni ensures that all is in order for our four-day stay.

Over a century in existence from 1899, Le Fouquet's famous restaurant has evolved from a meeting place for coachmen to becoming renowned as a rendezvous for those in the arts and business - the hotel came much later. Maurice Chevalier, Orson Welles, Josephine Baker have all sat upon the brilliant red chairs in the warmth of wood-panelled walls to enjoy everything from fois gras de canard to cognac-flamed fillet of Simmenthal beef with peppercorns. Of course, with the appropriate wines. What better place to start our Parisian adventure than dinner there on our first night?

The next morning, it's over to Musee d'Orsay for the much-heralded exhibition of 'Splendour and Misery: Images of Prostitution, 1850-1910', which runs until January 17, 2016. The New York Times reviewed it on opening day, September 22, and remarked that men and women abandoned the countryside for Paris, swelling the city from one million in 1850 to almost two million in 1870.

Elaine Sciolino noted: "Every major artist and writer (male, of course) explored the subject [of prostitution]." And so the exhibition begins with familiar paintings by Edgar Degas, Toulouse-Lautrec, Manet, Van Gogh, Picasso, even Edvard Munch. Just as Kingston is filled with people thronging from the countryside for a better life, so, too, were those in France more than a century ago. And so many have entered into the same survival modes.

I had no idea that ballet was initially a somewhat dubious career for a young woman; that those marvelous curves and hidden corners of the beautiful Palais Garnier opera provided opportunities for patrons in top hats to meet with their protÈgÈes. I shall look at Degas' paintings in a new light now.

What really astonished me were the rooms 'interdit aux moins de 18 ans', which is to say forbidden to those under 18. Behind the red curtains in darkened rooms, the curators provide postcards and images of a pornographic nature taken of women a century ago. Remember in all those old movies and novels where they mention 'naughty' postcards? Well the Musee d'Orsay has them on display. Another interdit room has some of the first pornographic films, short ones, but of men copulating. Now this I had never seen before.

After leaving what was a very crowded room, we progressed through more masterpieces of women, no longer just lifting their long skirts to show an ankle, nor bathing, but mixed in were some very dignified women who attained great social status as mistresses of very important men, in elegant fully clothed portraits. Even though my Parisian girlfriend and I did not linger too long, it took us one and a half hours to view this very grand exhibition, which, I might add, also includes photographs of people with syphilis! An educational exhibition, this one, which should be treated seriously.

Rather than lunch in CafÈ Campana behind the face of Musee d'Orsay's huge clock, we recoup our energy by dining in the museum's restaurant. First opened in 1900 when the building was a hotel, little wonder that it is a listed historic monument with its chandeliers and beautifully painted and gilded ceiling.

Refreshed, we visit old friends, the most wonderful collection of Impressionist paintings, which is a must-see here. The spectacular views of Paris from this fifth-floor gallery is an added pleasure.

What an incredible contrast with our next morning's visit to Fondation Louis Vuitton, opened 2014 in the Bois de Boulogne. Bernard Arnault, head of the luxury brand empire, inspired the LVMH group to create the foundation in 2006 to promote and support contemporary artistic creation. American Frank Gehry, architect of the Guggenheim Museum in Bilbao, has achieved a stupendously exciting building to house this artistic creativity. Indeed, the building is the main reason to visit the multimedia art centre.

With its 12 'sails' of glass, he has achieved the spectacular! I just wish I could say the same about the 'art' inside.

Our initial entry into a pitch-dark room with multiple screens and mirrors reflecting a video by Douglas Gordon of two Israeli musicians performing in Poland, their images positioned at various angles as their music flowed through a large area was quite thrilling, as though we were immersed in them.

But things got weird when we entered another darkened room to Jaan Toomik, Father and Son 1998 as the father's image, projected from a far distance came closer and closer, revealing a nude ice skater on a frozen lake, as we heard the son keening Gregorian chants.

We had to watch several minutes of this before it started over and we realised that this was the great artistic creation. The only thing weirder were the black mylar balloons filled with helium floating above us in a corridor - resembling giant cockroaches.

Phillippe Parreno's 'Speech Bubbles' "give the space the imaginary popular dimension of a comic book". This at an event where people are encouraged to express themselves. I couldn't help thinking that this art is created by and for people raised on comic books, video games and YouTube. What a waste of fantastic space! I know, my age is showing.